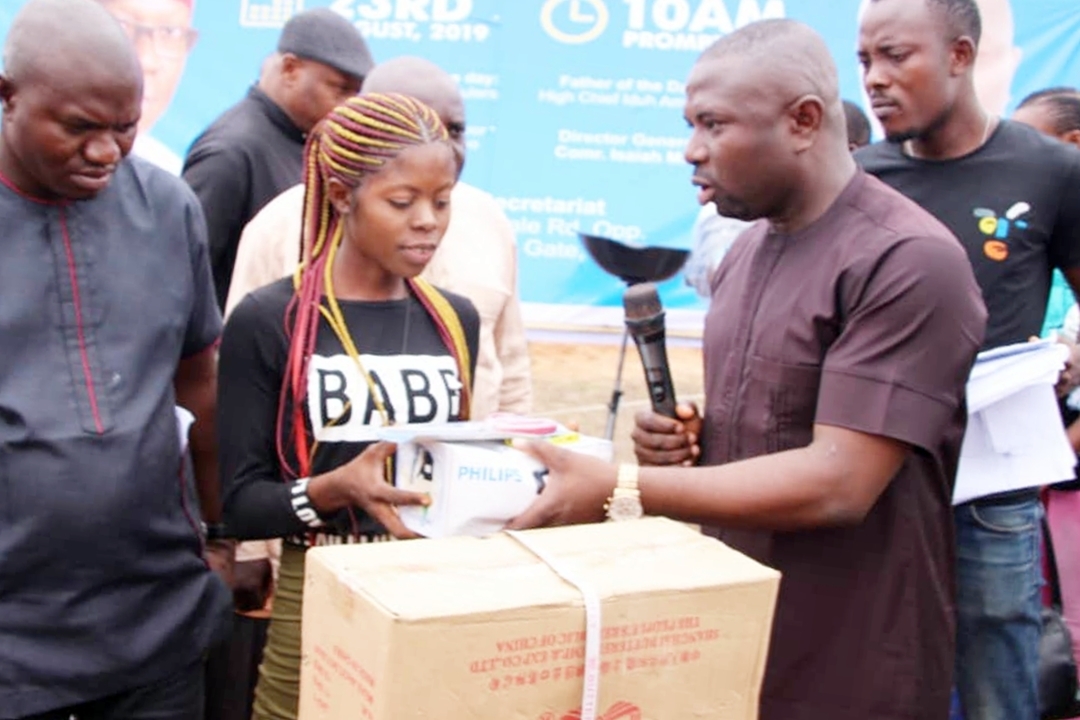 History was made on Saturday, August 24, 2019 as Seventy-Five (75) youths of Isoko nation were fully equipped and empowered by the Comrade Umuakpo Ovie led Isoko National Youth Assembly, INYA.

The empowerment programme which witnessed the distribution of various starter packs and cash transfers to set them up on their learned trades and education, was ably chaired by Hon. Jude Ogbimi, a former House of Assembly hopeful.

The Chairman in his opening remark, charged the youths to become more alive to their potentials and usefulness as youths.

The event which was tripodal, had the symbolic groundbreaking ceremony of the Isoko youth house by His Excellency, Senator Dr Ifeany Okowa; empowerment of all trainees of Isoko National Youth Assembly with various starter packs; and presentation of N20,000 cash award to selected students of tertiary institutions across the nation.

It would be recalled that, the youth president had in the umpteenth time, reiterated his commitment towards building capacity among youths, hence, the creation of the Directorate of Productivity and Capacity building, with Comr. Azilo Ogunye as pioneer Director General.

Subsequently, after its creation, the Directorate made a call for application for youths of Isoko extraction interested in learning a skill. Members of the executive council, clan governors, representatives and leaders from various clans, respectively nominated at least one of the applicants while others made the merit list, who were thereafter enrolled in the Delta state technical and vocational center, Ozoro, where they were thoroughly and professionally trained in their choice fields which they successfully underwent.

Poised to empower the beneficiaries beyond training, the INYA President led the Executive Council to approve and purchase adequate starter packs for all trainees on completion of their program and which were distributed at the event.

The governor who was ably represented by the Honourable Commissioner for Youth Development, Hon. Ifeanyi Egwunyenga flagged off the distribution of the items. Presentation of the items were also made by the Chief Job Creation officer of Delta State, Prof Eric Eboh, Chief Duncan Afahokor, Comr. Henshel Oruga, Comr Azilo Ogunye and the INYA President, Comr Umuakpo Ovie.

In his remark, the governor noted that the state was more than pleased with the Umuakpo Ovie led administration for the laudable and lofty initiatives which are vastly redefining and reshaping youth leadership in the state.

“Mr President, you keep wowing us with you audacious and brilliant initiatives since you came onboard. You represent the very classical example of contemporary leadership which is purpose driven and people centered. We wish that all other youth bodies will domesticate these ideas”.

In his speech, the Chief Job Creation Officer of the State, Prof. Eric Eboh submitted that the training and empowerment initiative was much in line with Governor Okowa’s prosperity agenda and expressed willingness to partner with the Directorate of Productivity and Capacity building of the Assembly to train and empower more Isoko youths.

In his charge to the beneficiaries, the INYA President, Comrade Umuakpo Ovie urged them to see the gesture as sacrificial and make the most of the tools given them, such that in the near future, they would have empowered others in different capacities.

“We made a lot of sacrifices to see that you get a living for yourselves. We denied ourselves a lot to put smiles on your faces and to lift diverse burdens off the shoulders of your parents and guardians. Never take this lightly. Make the most of it and improve the quality of your lives. You’re inexcusable if you fall short of our expectations for you” he said.

Other dignitaries that graced the occasion include the Senior Special Assistant to the governor on job and wealth creation, Comrade Michael Akpobire, Comrade Elvis Akpobi, representative of the Isoko North council boss, Hon. Kome Ozue, 1st Vice President and Organizing Secretary of IDU, amongst others.

Governor Okowa Salutes Sultan Of Sokoto At 63
Delta @ 28: There Is Room For Improvement – Macaulay
Advertisement