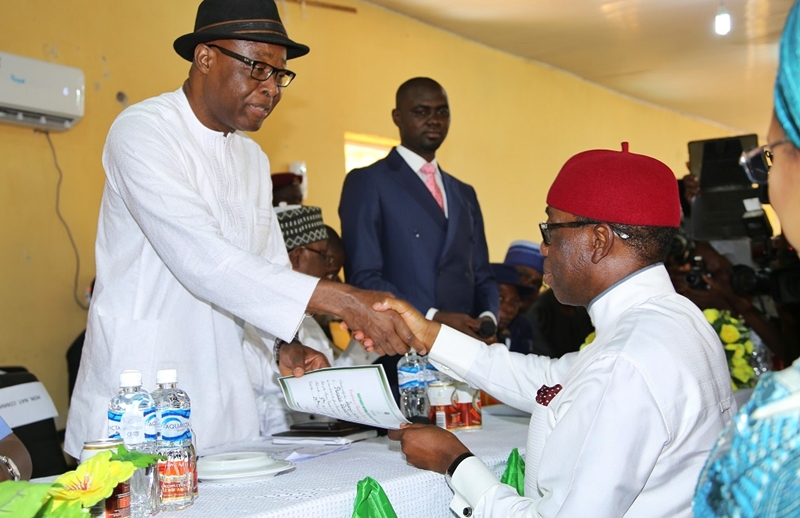 The Independent National Electoral Commission (INEC) has presented certificate of return to the Governor of Delta State, Senator Dr Ifeanyi Okowa and his Deputy, Barr. Kingsley Otuaro who was his running mate in the March 9, 2019 governorship election.

Governor Okowa while receiving the certificate of return at INEC office in Asaba on Wednesday, March 27, 2019, thanked Deltans, the INEC, security agencies and all those who played different roles during the elections, observing, “the election was adjudged as very peaceful in Delta State.”

He called on all Deltans to actively participate in governance in the next four years starting from May 29, stating, “we cannot do the job alone; with collaborative efforts, partnership, the job will be easier and to the satisfaction of all.”

“In the next four years, we will do much more than we have done in the last four years; in 2023, people will judge us based on our performance and we are committed to be accountable to God and our people,” he said.

Governor Okowa who was accompanied to the INEC office by his wife, Dame Edith and a retinue of political office holders, used the occasion to urge Nigerians to be committed to democracy, noting that Nigeria will be better when things are done right.

“There is room for growth in our democracy; we must conduct elections in such a manner that will be appreciated by the world as such will boost the confidence of the people and attract investors to our country; politicians should realize that election is noble and should go out and campaign for votes and ensure that elections are devoid of avoidable deaths,” he said. INEC National Commissioner, Dr Mohammed Lecky who presented the certificate of returns to Governor Okowa and his Deputy respectively had in an address, congratulated the Governor and all those who won in the elections, stating, “today’s event is the highpoint of one of the legal requirements on the journey to assumption of office, after being elected.”

“Section 75 (1) of the Electoral Act 2010 (as amended) provides for the issuance of certificate of return to elected candidates by the INEC and by this event, the Commission has complied with the requirement of law in this regard,” Dr Lecky said.