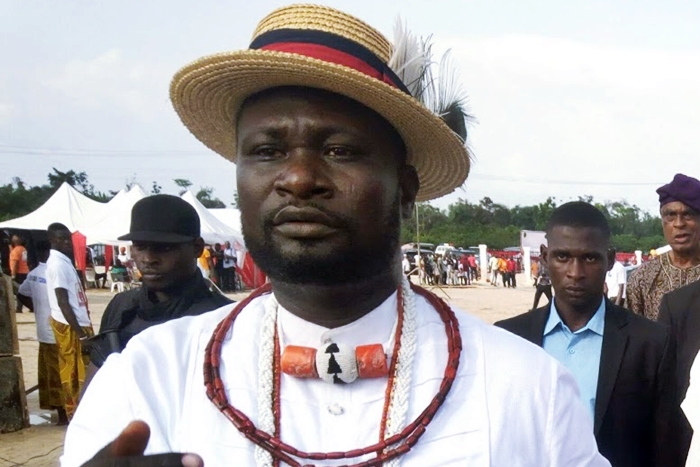 The people of Ugborodo Community in Warri South West Local Government Area of Delta State have called on the Federal Government to hold the Ologbotsere of Warri Kingdom, Chief Ayiri Emani for the alleged killing of three indigenes of the Community and burning of houses during Saturday’s invasion by security agents.

In a Save Our Soul (SOS) message to President Muhammadu Buhari on Monday, the people cried out that there was a deliberate attempt to silent them since;”We told the whole world the truth that we have never been under the Lordship of the Olu of Warri Kingdom”.

They said that they were not surprised that they sent security agents after them few hours when they embarked on a peaceful protest against what they described as “Slave Treatment” from the Palace of the Olu.

According to them;”We wish to restate our stand that Ugborodo is not a part of the Warri/Itsekiri kingdom and that this should not be misconstrued as formenting trouble but rather, putting the record straight and being on the right side of truth on this issue which we have consistently stated. We have usually and continue to live peacefully with our neighbours (The Gbaramatu Kingdom) And all we ask is to be left alone to continue living in peace”.

“On Saturday morning we came out to protest the slavery of our people by some few people in Warri. Few hours after the successful protest, the Ologbotsere of Warri Kingdom, Chief Ayiri Emani backed by the Delta State Government invaded our peace loving community with security agents and killed three innocent indigenes of the Community and gave them all sorts of names. They burnt several houses in the community as well”, the people stated.

They added that;”We are living in abject poverty in our Community. They came and invaded our community and started calling us armed robbers, kidnappers, bunkerers and all sorts of names. The large crowd that came out on Saturday morning for the total liberation of their Community are not bunkerers, Sea pirates, thieves, armed robbers or Kidnappers. We are therefore crying out for justice for the killing of our innocent indigenes. The Federal Government should hold the Ologbotsere of Warri Kingdom Chief Ayiri Emani and men of the Nigerian Police for what happened in our Community on Saturday”.

According to them also;”Politics cannot be ruled out from the current crisis in our Community. Now that the Ologbotsere of Warri Kingdom, Chief Ayiri Emani is now warming his way back to the heart of the Governor, they are doing everything to silent us. We want to appeal to the Federal Government under the administration to come to our rescue. We are a peace loving community who abide by all the laws of the land. We are not criminals, but traders who are trying to make legitimate living”.

“The men of the Nigerian Police turned their fire against the people that they are supposed to protect. The Army and Navy were disciplined and civil during the operation, the ugly incident will not have happened if the Police that killed our people behaved like the Army and Navy. Their deaths should be probed and should not be swept under the carpet”, they averred.