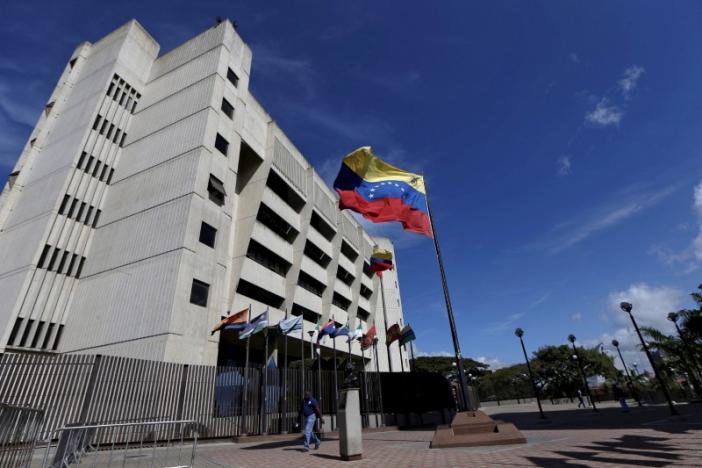 Venezuela’s Supreme Court has been attacked by grenades dropped from a helicopter in what President Nicolás Maduro called a “terrorist attack”.

Footage on social media shows a police helicopter circling over the city before shots and a loud bang are heard.

The police officer said to have piloted the stolen aircraft issued a statement denouncing the “criminal government”. His whereabouts are unknown.

It comes after mass protests against the political and economic crisis.

The Supreme Court is regularly criticised by the Venezuelan opposition for its rulings which bolster Mr Maduro’s hold on power.

In an address from the presidential palace, President Maduro said the helicopter had flown over the Supreme Court and also the justice and interior ministries.

Officials quoted by Reuters news agency said four grenades were dropped on the court and 15 shots had been fired at the interior ministry.

No injuries were reported but Mr Maduro said “a social event” had been taking place at the Supreme Court and the attack could have caused “dozens of deaths”. One of the grenades failed to detonate, he added.

Mr Maduro has placed the military on alert.

“I have activated the entire armed forces to defend the peace,” he said. “Sooner or later, we are going to capture that helicopter and those who carried out this terror attack.”

Who flew the helicopter?

The police officer identified himself as Oscar Pérez in video statements posted on the social media platform Instagram.

Appearing in military fatigues and flanked by armed, masked men in uniform, he appealed to Venezuelans to oppose “tyranny”.

“We are a coalition of military employees, policemen and civilians who are looking for balance and are against this criminal government,” he said.

“We don’t belong to any political tendency or party. We are nationalists, patriots and institutionalists.”

He said the “fight” was not against the security forces but “against the impunity of this government. It is against tyranny”.

It is not clear how much support, if any, the officer has.

Mr Maduro said the pilot had worked for former Interior and Justice Minister Miguel Rodriguez Torres, but was no longer with him.

BBC News Corespondent in Mexico explained that, It is generally an exercise in futility trying to predict if some new twist in Venezuela’s long-running crisis is a “turning point” for the country.

There have been scores of seemingly decisive moments over the past few months – from the initial decision to strong-arm the national assembly, to the latest death of a teenage protester in Caracas – that quickly faded into the general malaise afflicting the oil-rich nation.

However, the sight of an apparently disaffected member of the security forces dropping grenades on the Supreme Court and allegedly firing on government buildings is extreme, even by Venezuela’s standards.

Whether “Oscar Pérez” is indeed part of a coalition of like-minded “military employees, policemen and civilians” or just a rogue policeman is hard to say.

Certainly President Maduro was quick to dub the incident “a terrorist attack” and used it as a reason to “activate” the armed forces to keep the peace.

However, earlier in the day he, too, had thrown down the gauntlet to his opponents. “If the Bolivarian Revolution was at risk,” he said, “what we couldn’t do with votes, we would do with arms.” The opposition in Venezuela took that as an overt threat.

This helicopter incident may also pass quickly, or it may be more serious. Certainly though, the security situation in Venezuela could hardly be worse ahead of a highly controversial election next month over the government’s plan to create a new constituent assembly.