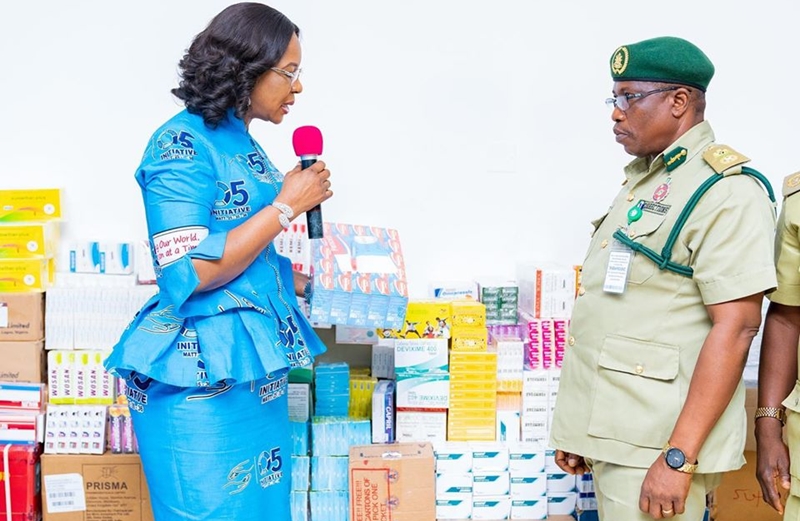 Committed to her passion of giving succour to the needy and less privilege in the society, Wife of Delta Governor, Dame Edith Okowa and Founder, O5 Initiative has donated another set of medications worth millions of naira to the State Command of the Nigerian Correctional Service (NCS).

Dame Okowa, who made the donation on Monday, December 2, 2019 at her office in Government House, Asaba, charged the Service to judiciously use the medications to the welfare of the inmates.

She stated that visits by O5 Initiative to the Five Correctional centers (previously known as Prisons) in Warri, Agbor, Sapele, Kwale and Ogwashi-Uku, revealed that Inmates needed regular medical care which birthed the periodic donations of all free expense medications to the Service by the O5 Initiative.

According to her, “We noticed that the Inmates were sick. I reached out to the State Drug Revolving Fund to know how we could get free medications for the inmates. I wrote to several pharmaceutical companies and here are their supplies.”

“As these medications leave here, I pray that it get to the end users and I hope that more drugs will be supplied by the pharmaceutical companies in due time.”

While commending the pharmaceutical companies, Delta State Drug Revolving Fund and individuals who contributed towards the provision of the medications, Okowa appreciated the service of the only Medical Doctor in-charge of the Five Correctional centers, Dr Elliot Ogunbor for ensuring the well being of the inmates.

Medications Donated by Delta First Lady, Dame Okowa and her Foundation, O5 Initiative to the Five Correctional Centers in the State

In his response, Delta State Controller, Nigerian Correctional Service, Mr Sam Iyakoregha commended Dame Okowa and O5 Initiative for supporting the health and wealth of the inmates and assured that the medications will wholly be used by the intended end users.

It will be recalled that Dame Edith Okowa and her foundation, O5 Initiative began outreaches to Correctional centers in  the state on June 1, 2015. At each visit, the First Lady and her team shared meals with inmates, provided clothes and secured the release of some inmates.

Dame Okowa since 2015 has made the donation of medications to inmates of the Five Correctional centers a yearly affair.