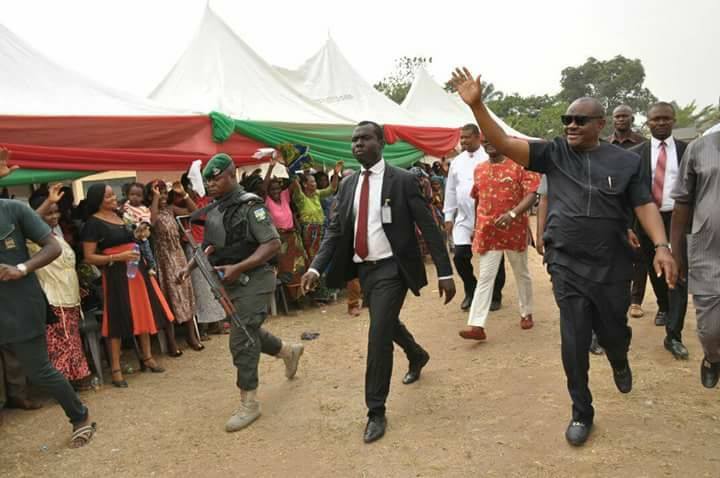 Governor Wike has announced the construction of Odufor-Akpoku-Umuoye Road as s reward to Etche people for voting massively for the PDP during the Etche/Omuma Federal Constituency supplementary elections.

The governor also declared that the Independent National Electoral Commission ( INEC) is working in concert with the All Progressives Congress ( APC) to rig the 2019 General Elections.

Speaking on Saturday during a thank you visit to Etche Local Government Area for their support to the PDP during the Supplementary Elections, Governor Wike said: “INEC is planning to rig the 2019 General elections.

“These pliant Electoral Officers being handpicked from APC states are to help in rigging the elections in 2019 “.

Governor Wike said that no level of fraudulent postings by INEC to Rivers State will lead to a favourable ground for rigging elections.

“If they like, let them post their fathers to Rivers State, we will resist any attempt to rig the 2019 elections in the state. Our people will remain vigilant.

“They can rig in another state, certainly not Rivers State. For us, we must elect our representatives through the democratic process. Nobody will intimidate us”, he said.

He noted that if INEC planned to re-position the electoral system, such reform must start from the top. The governor said reforms from the bottom smacks of hypocrisy.

He added that once security agencies follow electoral guidelines, elections will hold peacefully and the actual representatives of the people will always emerge.

While commending the Etche people for standing firm during the Supplementary Elections, Governor Wike assured them that they will always benefit from his administration.

Member Representing Etche/ OmumaFederal Constituency , Chief Jerome Eke said that the several rerun elections in the state have confirmed Governor Wike as a true leader of the state who has the support of the people.

He said: “They ordered several rerun elections in Rivers State, instead Governor Wike is now more popular as the entire country has realised that he is on ground and controls the Rivers political space “

Winner of the Etche State Constituency 2, Mr Tony Ejiogu dedicated his victory to Governor Wike for his delivery of projects to Etche people, which convinced the people to vote for PDP.