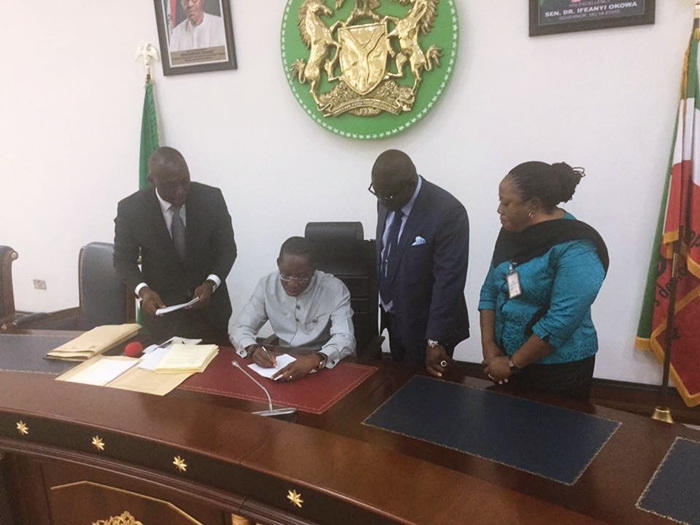 Okowa gave his in assent to the bills at Government House, Asaba in the presence of top government functionaries.

The Speaker of the State House of Assembly, Rt. Hon. Sheriff Oborevwori was accompanied by Hon. Oboro Preyor, Hon. Rueben Izeze, Hon. Daniel Yingi and the Clerk of the House to the ceremony, Lyna Ocholor.

While signing the bills, Governor Okowa assured that, the people will always get good governance. “We will collaborate with the Delta State House of Assembly to ensure that laws are passed to impact positively on the lives of our people.”

“I must truly appreciate Mr. Speaker and members of the House for being able to complete the process of passing the bills into law; there is no doubt that the Delta State Investment Development Agency Bill is something that will help to improve on the investment climate of the state and we need the growth of industries; this bill has helped to create an agency that will directly partner with would-be investors and to a very large extent will shorten the time required to process documents and have partnership that yield results between our state and investors,” Governor Okowa disclosed.

He further explained, “with the bill on the Delta State Agency on the Control of HIV/AIDS – we have that agency already in place but, they can only become operational with the signing into law of this bill,” he said, adding, “the College of Education Bill, Mosogar was created on the fact that it was just a College of Physical Education, but, after the visit at their last convocation, at the request of the College and that of the community, we believe that it would be better if the College became a fully-fledged College of Education but, with specific attention to physical education and I am glad it has been passed into law which will enable the College admit students in the next academic session.”

“The Delta State Agricultural and Rural Development Authority amendment bill was to give strength to the operations of the agricultural extensions services because, if we are going to do well in the agricultural sector there is a need to strengthen the agricultural services in such a manner that our farmers are exposed to modern agricultural techniques which will improve on their farm skills and also, enable them have access to new techniques from our research teams,” he said, stating that “the Delta State Hotel Occupancy, Restaurant, Departmental Store Consumption Tax Bill is a bill that will help to generate revenue for the state and in partnership with various owners of restaurants, hotels, it is my belief that we will be able to generate revenue that will help improve on our economy, which will in turn impact positively on our people.”

Governor Okowa reiterated, “I am proud of the Delta State House of Assembly, it is aptly, the most vibrant legislature in the country and I have lost counts on the number of bills that have been signed into law; I am confident that more bills will be signed in the next few months.”

Rt. Hon, Oborovwori had while presenting the bills for accent, told the Governor that the bills passed through all the processes required for them to be passed, assuring that the legislature will continue to partner with the Delta State government to deliver dividends to Deltans.