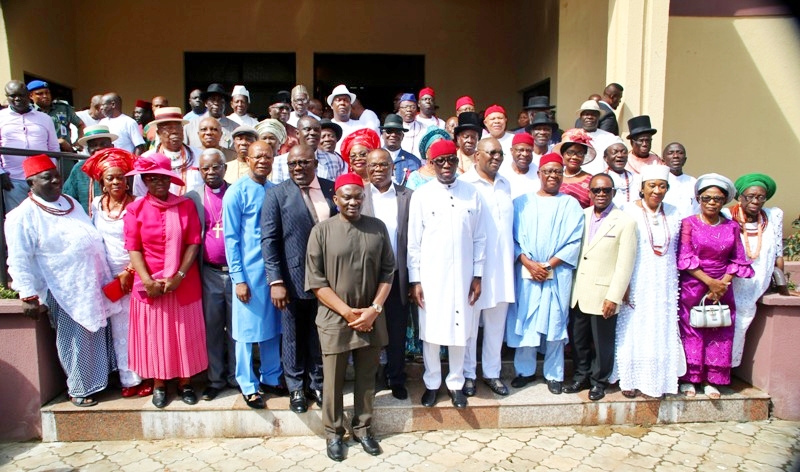 Delta State Governor, Senator (Dr) Ifeanyi Okowa has inaugurated the state’s Advisory and Peace-Building Council, with a charge to members to avail his administration with adequate guide that would engender effective governance in the state.

Okowa at the inauguration ceremony on Tuesday, October 15, 2019 at Unity Hall, Government House, Asaba, said that the council was expected to support the government regularly with expert advice and services without prompting.

The governor said that the main responsibilities for the council included the power to study the general socio-economic and political situations in the state and offer advice to the government.

According to him, the council will advise on issues that can lead to a healthy relationship between the three arms of government – Executive, Legislature and Judiciary.

“This objective shall also be adopted with regards to the local government councils as it will also render advice on issues, which can strengthen the harmonious relationships with the Federal Government and states.

“It will also study the causes of conflicts among various communities in the State and advise on measures to effectively mitigate them, and further advise on appropriate peace-building mechanisms to ensure the sustainability of various peace programmes of government.

“The council is also expected to deliberate and advise on any matter referred to it by government and bring up new initiatives for the administration’s sustained efforts at maintaining the peaceful co-existence of our people, including residents in the State.

“The state government is at all times, seeking for ways to strengthen the base for the peace and unity of the different ethnic nationalities, in addition to inter and intra-community relations in the State.

“This is, because no meaningful development can take place in the absence of peace. By the special grace of God, in the last four years, we have had a largely peaceful state; that is one major reason we were able to achieve the much we did,” he said.

Okowa stated that some of the credit for the achievements would go to the Advisory and Peace Building Council.

He congratulated the 42-member Council, and urged the members to always work for harmonious, peaceful co-existence in every part of the state.

He appealed to the citizens to continue to cooperate and partner his administration to ensure sustainable development in every part of the state, adding that the government would continue to tap from the wealth of experience of elders.

Responding on behalf of the members, Oyovbaire thanked the governor for the confidence reposed in them, and said “we know that you listen and that you are focused.

“We will work with you and do our best to make our state better, because you are a peace builder.”