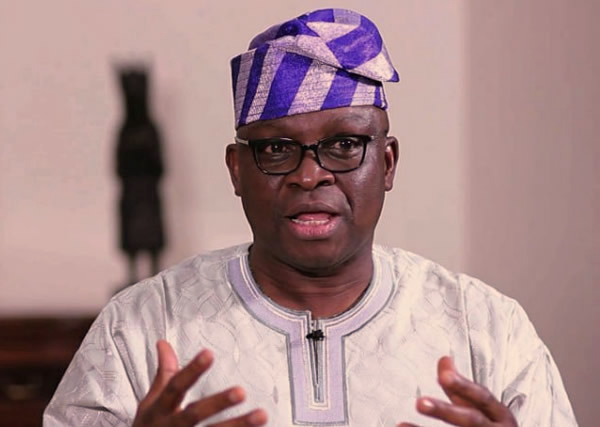 Governor Ayodele Fayose of Ekiti State has been appointed as the Chairman of the Peoples Democratic Party Governors Forum.

Gov. Seriake Dickson of Bayelsa made the announcement while briefing newsmen on the outcome of the Forum and PDP Caucus meeting which ended in the early hours of Friday in Abuja.

Dickson said that the PDP chieftains had a very fruitful deliberation on the state of the nation and the party.

“As an integral part of the discussion, the governors of our party, among ourselves, as well as those who were unavoidably absent, unanimously appointed a new PDP Governors’ Forum Chairman.

“In line with the tradition of our party, we agreed to appoint our colleague, the most senior governor in PDP, Ayodele Fayose, the governor of Ekiti as new Chairman of the PDP Governors’ Forum.

“You are all aware that he is a committed party man, doing a wonderful job in his state. He is well experienced and committed to the ideals of our party.

“We have all unanimously appointed him as the new Chairman of the PDP Governors’ Forum to coordinate the affairs and activities of our forum and to work and collaborate with other structures of our party,” he said.

The Bayelsa governor, on behalf of the forum, expressed appreciation for the sacrifices and contributions of the outgoing chairman of the forum, Gov. Olusegun Mimiko of Ondo state, to the forum and the party.

“He did a very wonderful job while he served as our chairman, leading and coordinating our activities.

“He is now rounding off his meritorious eight years’ service to his state and to Nigeria.” He said that the forum wished Mimiko well as he would continue to work as a leader to move PDP and the nation forward.

Speaking with newsmen after the announcement, Fayose said that he had accepted the responsibility to work as chairman of PDP Governors Forum.

He pledged that he would work with stakeholders, including the National Assembly, to restore the glory of the PDP.

“I take this responsibility at a time the party needs somebody to stand up. I am sure you all know that we will do it to represent Nigerians well. “It is a call to pull the walls of Jericho down; it is a call to make a difference. “I want to assure you that within the next few months, the mobilisation, the consultation will be so effective and there will be a new beginning for our party – different and enriching,” Fayose said.

He also commended his predecessor, Mimiko, for his contributions to PDP, saying time would not permit him to continue. “I will take over from where he stopped. Come 2019, we will take over again, we are going to come back again,” he said. Fayose added that some people in their imaginations believed that PDP was divided but that in a short while, the party would be stronger than ever.

The News Agency of Nigeria (NAN) reports that leaders of the party present at the meeting pledged their support for Fayose. Chairman of National Caretaker Committee of the party, Sen. Ahmed Makarfi, said leadership would give Fayose the needed support.

Chairman of the Board of Trustees (BoT), Sen. Walid Jubril, also pledged the board support to Fayose. “This is the beginning of success and the continuation of the party to be one. “So, all speculations by any other person about the disintegration of the party are gone. We are one and we will continue to be one,” Jubril said.

Deputy President of the Senate, Ike Ekweremadu, assured that members of the party at the National Assembly would support the new leadership of the party’s Governors’ Forum.