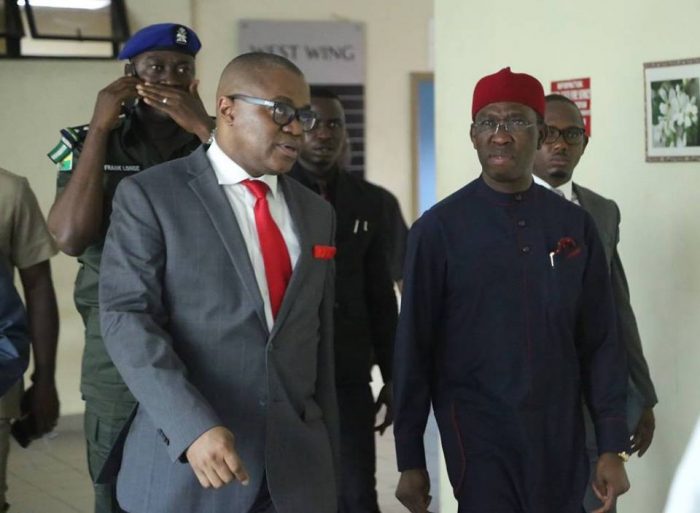 Delta State Governor, Senator Dr. Ifeanyi Okowa has said sit-at-home actions by trade unions should not be considered as an option in resolving disputes bearing in mind the tough financial situation of the country.

Addressing the Board of Directors of the Delta State University Teaching Hospital (DELSUTH), Oghara led by Dr. Chris Oghenechovwe, management and staff of the hospital on Friday 4th November, 2016, the governor decried sit-at-home action otherwise known as strike as the best form of achieving desired results.

The governor who was earlier conducted round the facilities in the hospital by its Chief Medical Director, Dr. Harrison Abedi, said, “I want to condemn the issue of strike; whatever reason we intend to give, the issue of strike is not something someone in an health environment will embrace; when you are on strike lives are lost; when you are on strike, you receive salaries and anybody who is a Christian, know that it is not just right.”

“Strike should not be the first point of call; strike is certainly not a solution at all,” the governor reiterated, asserting, “it is a very unfortunate situation.”

He disclosed that the economic situation since June, 2014 as a result of dwindling revenue from the oil sector has had its tolls on several sectors and called for understanding of the workforce.

“We need to manage what we have and we should know that the best union leader is not the one that takes his members on strike whenever there is an issue, he is that leader who continuously engage in dialogue to the benefits of his members,” the governor stated, and urged the management of DELSUTH to be proactive.

The governor also appealed to the Oghara community to be involved in ensuring a secured environment for staff of the hospital.

Dr Oghenechovwe had commended Governor Okowa for his interest in making DELSUTH one of the best in the country, observing that the meeting had proffered solutions to some of the challenges of the institution.

During the inspection tour of the hospital, Governor Okowa took pity on a couple that could not pay their medical bills and did such for the couple.