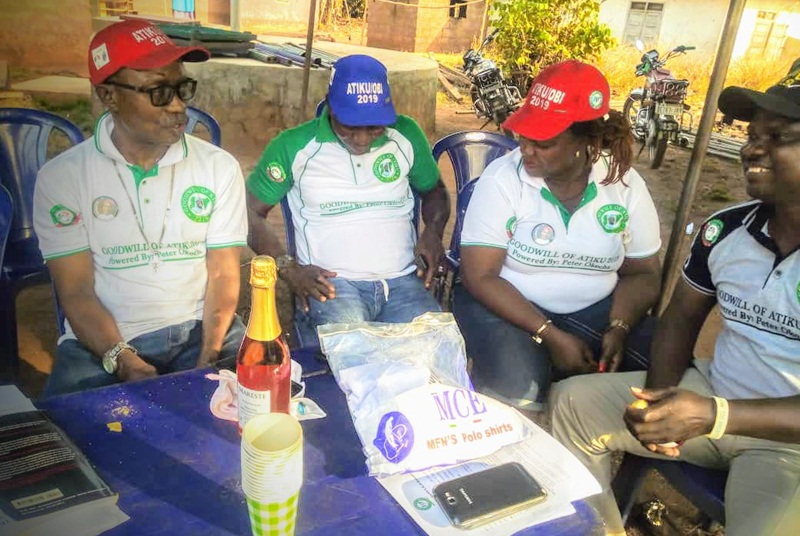 The newly inaugurated executive members of the Goodwill of Atiku 2019 in ward 4, Onicha Olona in Aniocha North Local Government Area of Delta State have been charged to ensure total mobilisation of the electorates for the victory of Alhaji Atiku Abubakar and Sen. Ifeanyi Okowa among other PDP candidates for the coming general election in February and March 2019.

The Chairman/National Coordinator of the support group, Chief Owelle Jerry Nkeweshe gave the charge at the inaugural meeting of the ward 4 executive committee of the group held in Onicha Olona, Aniocha North Local Government Area on Saturday, 5 of January 2019.

Chief Nkeweshe, who counselled the new executives to brace up for the task ahead, also reminded the new executives and other members of the group that the assignment to ensure total victory for Atiku and Okowa among other PDP candidates in the forthcoming election in February and March 2019 in Nigeria is a call to serve and must be taken as a personal project.

Mr. Godfrey Osakwe, Director of Strategy/Communications of the support group who administered the affirmation of oath on the new executives, also admonished the new executives to remain focused on the task ahead and to mobilise all to work assiduously to achieve the collective objectives which is to deliver Atiku Abubakar as President of Nigeria, Ifeanyi Okowa as Governor of Delta State among other PDP candidates in the coming election.

Osakwe said that Goodwill of Atiku 2019 if fully registered with the Atiku Presidential Campaign Organisation with Reference/Registration No: 3502, and membership of the group is based on possession of a Permanent Voters Card (PVC) and self-conviction to elect credible hands and creative minds to superintend affairs for the good of all Nigerians irrespective of tribe or religion. He posited that the support group was borne out of the urgent need to join hands with men and women of goodwill and good conscience to rescue Nigeria from total collapse. “We cannot all fold hands and watch few individuals in the corridors of political power destroy our patrimony and mismanage our commonwealth” Osakwe reiterated.

Also speaking during the inauguration, Hon. Isioma Chukwu who served as the moderator emphasised on the need for collective engagement of the electorates and to spread the message of Atiku and Obi candidateship, which is to salvage and save Nigeria from precipice.

Responding on behalf of the inaugurated ward 4 executives, Mr. Ifeanyi Metuiwe, the organising secretary pledged their commitment to work in line with the stipulated mandate which among others; to promote, defend and canvass votes for Alhaji Atiku Abubakar and Sen. Ifeanyi Okowa among other PDP candidates listed for support in the 2019 general election in Nigeria.

The Goodwill of Atiku 2019 support group, a political movement of progressive Nigerians who are desirous to change the sad narratives of Nigeria occasioned by bad governance; believes that His Excellency, Alhaji Atiku Abubakar offers a better option in the quest to restore hope and get Nigeria working again.  The group which has offices in Asaba, Delta State, Awka, Anambra State and Abuja, the Federal Capital Territory has begun mobilisation of the electorates across the South-South, South-East Nigeria and Abuja respectively so as to deliver Atiku as Nigeria’s President come 2019 and other PDP candidates listed for support.