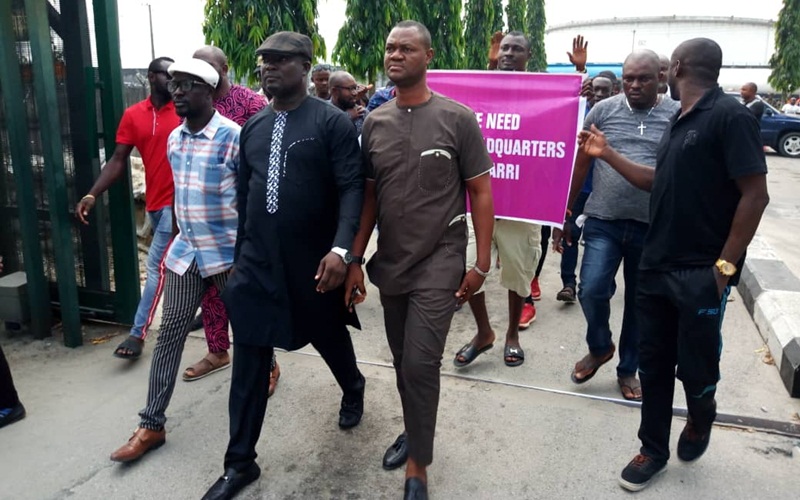 Delta State Commissioner, Ministry of Oil and Gas, Mr Freeman Fregene (Right) with Youths Protesting Against the Relocation of NGC and NGMC from Warri

The Delta State Government says it has put adequate measures in place to ensuring that multinationals and other Oil and Gas companies operating in the state do so under a well secured and peaceful environment.

The State Commissioner, Ministry of Oil and Gas, Mr Freeman Fregene who stated this while addressing hundreds of youths protesting against rumored plan relocation of operational headquarters of Nigeria Gas Company limited, NGC and Nigeria Gas Marketing Company, NGMC from Warri to Abuja said there shouldn’t be any reason for such action by the two indigenous companies.

Mr Fregene stated that from the inception of the Okowa’s administration, government has always ensured that peace was maintained between companies operating in the state and their host communities, stressing that “any action that tend towards truncating the peace process will be resisted and nip in the bud before it snow bowls into crisis”.

The Commissioner disclosed that the management of the Companies had outrightly denied the rumored relocation plans, noting that the Delta State Government was holding them to their words and have no reason for any doubts.

He said a peace meeting between officials of the state government, the management of NGC, representatives of the host communities and leadership of the various youth councils of Urhobo, Itsekiri, Ijaw, Isoko and Ndokwa ethnic nationalities was held where they agreed to hold a joint press conference denying the relocation rumour.

Mr Fregene stated that a communique on issues discussed and resolved upon, is being expected, expressing optimism that the state government intervention has brought the needed peace among stakeholders.

The Oil and Gas Commissioner commended the youths of the various ethnic nationalities for their calmness and peaceful disposition and urged them to also hold the companies to their words on the relocation rumors.

The Executive Director, Asset Management and Technical Services, NGC, Engr Emmanuel Akinsanya commended the Delta State Government for intervening on the matter and assured of sustained cordial relationship between all critical stakeholders.

The Delta State Commissioner, Ministry of Oil and Gas, Mr Freeman Fregene and the Executive Director, Asset Management and Technical Services, NGC, Engr Emmanuel Akinsanya during a meeting in Warri on the instance of the state government over rumored relocation of the operational headquarters of the company from Warri.