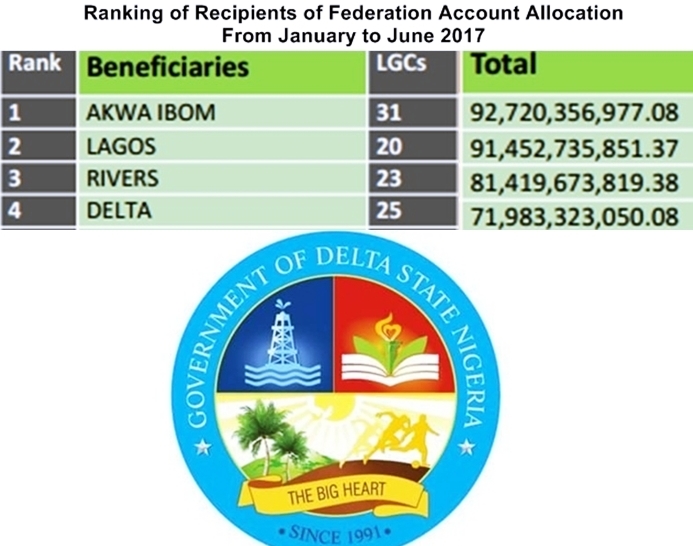 A fact sheet disclosing the breakdown of disbursement of funds from the Federation Account Allocation Committee (FAAC) to states in the country, shows that the Delta State Government has received the total sum of N71.98 billion from January to June 2017.

Delta state which came fourth in the line up of ten other states who received the largest share of the N2.56 trillion allocations in the first half year of 2017, in April got its largest disbursement of N13,041,748,220.93.

An investigation by Economic Confidential disclosed that the disbursements were confirmed after the monthly meeting of FAAC noting that the Federal Government received N1trillion in the said period.

The report by the economic intelligence magazine shows that apart from the federal government that got N1.09 trillion, Akwa Ibom has the highest allocation among the states when it received N92.72 billion within the period under review.

Apart from Akwa Ibom, nine other states who received the largest allocations are Lagos with N91.45 billion, Rivers comes third with N81.41 billion. The fourth position was grabbed by Delta with N71.98 billion, while Kano State got the fifth place with N62.90 billion, throwing a derivation state of Bayelsa to the sixth position with N61.45 billion.

Others among the first ten are Katsina State in the seventh position garnering N44.80 billion, Oyo hits number eight with N43.78 billion, Kaduna manages with number nine position with N42.60 billion and the tenth place surprisingly goes to Borno State, with N39.63billion despite the calamities that have befallen the North-eastern state.

The Economic Confidential search further reveals that the states with the lowest allocation from the Federation Account within the period under review are Gombe on the 36th position with N24.87 billion, followed by Ebonyi State with N24.91 billion in the 35th position, Nasarawa State in the 34th position with N25.41 billion. While Ekiti and Kwara states took the 33rd and 32nd positions respectively with N25.57 billion and N26.48 billion.

The North-central geopolitical zone got N190 billion to stand at the fourth position, while the fifth and the sixth positions went to North-east and South-east with N189 billion and N154.7 billion respectively.

With the transparency of this breakdown, State Governments who wailed for the paucity of funds, will have to explain to their citizens on how they judiciously made use of the disbursed National cake.