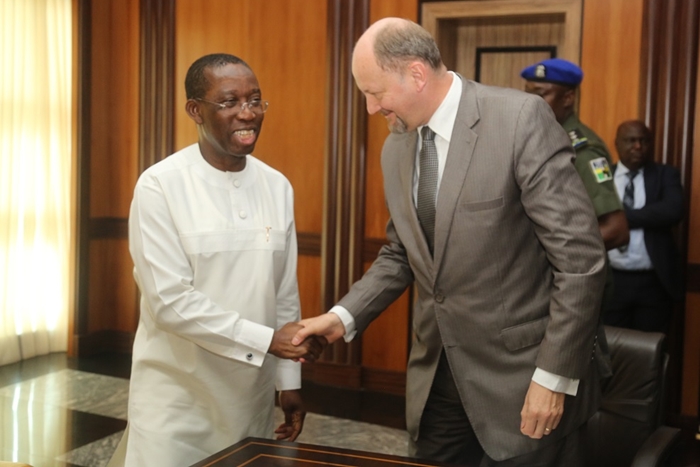 Delta State Governor, Dr. Ifeanyi Okowa has urged the European Union (EU) to prevail on multinational oil companies on the need to domicile their headquarters in their areas of operations.

Governor Okowa made the call on Tuesday June 6, 2017 when the European Union Ambassador to Nigeria, Mr. Michael Arrion paid him a courtesy visit in Asaba.

According to Governor Okowa, locating headquarters of multinational oil companies in their host communities would boost relationship between the companies and such communities and also, ensure that the host states are not shortchanged in terms of revenue generation.

“Most of the multinational oil companies do shortchange us as a people and as a state, they operate in this state but, their head office and their management staff are outside the state, there is the need for them to relocate to where they have their operations,” the Governor said, adding, “if all their operations are in the state, it is comfortable for our people and enables true partnership between the oil company, government, and the people when you domicile in the area where you make your money.”

He continued, “we hope they will listen to the voice of reasoning and relocate to areas where they have their operations.”

Senator Okowa also, used the occasion to appeal to the EU to assist Nigeria by encouraging its teeming youths to be positively engaged for them to be assets rather than liability to the society.

He stated that the youths could be encouraged to acquire skills or be engaged in the agro-value chain, disclosing that his administration had recorded successes in the skill acquisition programmes for youths and the empowerment of the youths though agriculture.

“We have willing youths who are ready to partner with the EU in the development of the agro-value chain,” the Governor assured, reiterating that despite financial challenges, his administration had revived technical education in the state and has continued to provide basic social amenities for the people.

While stating his administration’s readiness to partner with the EU, individuals and corporate organizations that desires to do business in the state, Senator Okowa commended the stabilizing roles the EU is playing in Nigeria and sub-saharan Africa.

Earlier, Mr Arrion had said he was on working visit to the state, noting that the EU has been in the country for 40 years with fruitful partnership with Nigeria and Delta State in particular.

He disclosed that the EU was interested in assisting the country in tackling terrorism, drug trafficking, illegal migration and ensuring that EU states invest in the country asserting, “we see Nigeria as a market to invest much more in, we believe that the European investments can lead to the diversification of the economy.”