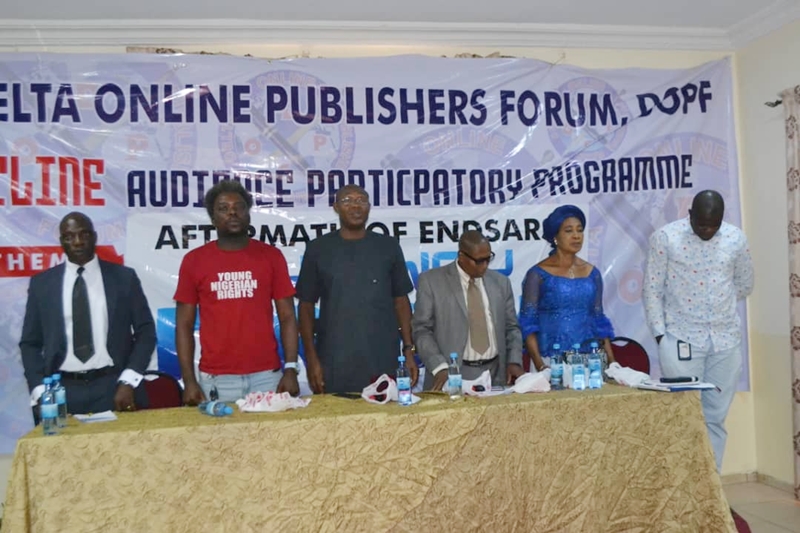 Participants at the Delta Online Publishers Forum, DOPF Interactive Programme, Frontline, on Thursday, November 12, 2020 brainstormed on the way forward after the #EndSARS protest which led to destruction of properties, killing of security agents and civilians as well as protesters, especially at the Lekki tollgate in Nigeria’s commercial nerve centre, Lagos.

The one day event which was anchored by Godfrey Osakwe, vice chairman, Delta state chapter of the Nigeria Institute of Public Relations (NIPR), dwelt essentially on proffering both immediate and far reaching solutions to the issues that snowballed into the #EndSARS protests.

Many of the participants agreed that the initial aim of the protest was on the need for a better Nigeria for all, good governance, better and reformed policing, job for all able and qualified Nigerian youths and the need to create a better future for the generations yet unborn.

But unfortunately, the protest was hijacked by hoodlums and it turned both bloody, deadly and an opportunity for looting spree by criminal elements in Nigerian cities without borders.

Mr. Osakwe who anchored the event, told participants that the agitation was a fallout of the attempt of political leaders to suppress the people and leave them in perpetual hunger and servitude. He argued that in democracy, it is the right of the people to protest perceived injustice on the part of government.

He said Nigerian youths wanted an end to police brutality and bad governance in Nigeria just as he condemned the destruction of properties and killing of police officers, saying it was barbaric and demanded the arrest and prosecution of the destructive and criminal elements.

He however, faulted the freezing of accounts of some promoters of the protest and seizing their international passports, noting that such actions on the part of the government was hypocritical and in no way a solution to the agitations of Nigerian youths.

On his part, Victor Ojei, Director General of Young Nigerian Rights, believes that the major problem in the country is unemployment. He said: “If Nigerian youths have jobs, if we are in a good society that cares for its citizens and we have a government that creates job for its citizens, there wouldn’t have been protest of any kind.”

Ojei popularly known as Wong Box, said due to unemployment, people are involved in many wrong actions, adding that government needed to go into industrialization where jobs are created for the teeming youths, a development which would pull them away from the streets and get them gainfully engaged.

He added that if government creates industries, it should manage them for a while and handover to private organisations that can run them for profit and productivity. He warned against politicizing government programmes as such actions would not produce the objective of such initiatives.

General Manager of The Pointer Newspaper, Mr. Monday Uwagwu, who was represented by the Editor in Chief of the newspaper outfit, Mr. Godfrey Ubaka, said #EndSARS was a metaphor of generational frustration in Nigerian youths. He insisted that it was a product of a failed society.

Uwagwu noted that Nigerian youths wanted a changed society where they would have the best of life but the system has failed despite all the attempts to change it, the powers that be refused to allow the system work for the good of Nigerians.

“The more we try to use the electoral system to change leaders, the more we fail to achieve our goal. The youths that participated in the protest are all Nigerians but the difference is in the refinement level of the protesters. Some are exposed, educated with good objectives but hoodlums with no values overran them and the objective was thwarted.”

A member of the Delta state youth parliament, Harvest Okpuno, blamed Nigerian leaders for the entire looting spree. He faulted government authorities for hoarding palliatives meant for the people of the states. He said the youths felt if they keep quiet and allow the system to continue, the incoming generation will not forgive them.

Dio Oghale Emeka Rex, Senate President of the National Association of Polytechnic Students (NAPS), toed a different line of thought. For him, the problem is not actually with the government but the Nigerian people.

He said there is SARS in every Nigerian citing example of members of the Nigerian Union of Road Transport Workers (NURTW) who increased transport fare during the COVID-19 and made to carry a number pf passengers but they have increased the number of passengers but refused to reduce the fare.

Celestine Ofuani, a Director in the State Ministry of Information, told the participants that Governor Ifeanyi Okowa met with the youths after the protest where he discussed with them on the way forward. Though some participants said the youths the governor met with were not the protesters, he said they are all Delta youths.

Director General of the Delta Bureau of Orientation, Barrister Eugene Uzum, who was represented by Ogagaoghene Ogheneyole, said the mass action by the youths was a call for nation building. He said everything the youths demanded for was for the good of the nation.

He however, said there is need for orientation as it is key to nation building. He insisted that the action and inaction of people was a result of their orientation. He said all the protesters are Nigerians but those who hijacked the process, looted properties and caused the destruction had low orientation.