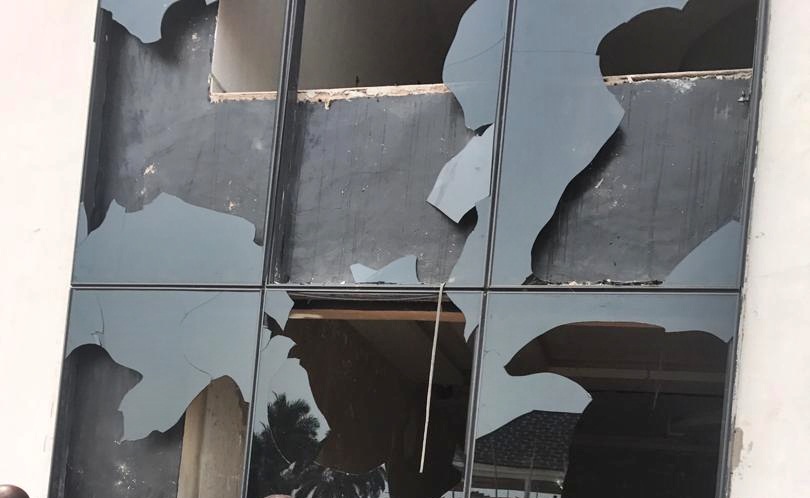 The Member Representing Ika North East in the Delta State House of Assembly and candidate of the Peoples Democratic Party, PDP in the 9th March 2019 House of Assembly election, Hon. Anthony Elekeokwuri has charged his supporters to remain calm even in the face of provocations and unwarranted attacks.

Hon. Elekeokwuri gave the charge while addressing a large number of residents of Umunede Community, his home town who were on a solidarity visit following the wanton destruction of his property, that of his father and those of some PDP chieftains by some persons allegedly led by an indigene of the town, Mr Sebastine Okoh who is contesting the 23rd February 2019 National Assembly election under the All Progressive Congress, APC.

The Lawmaker told his people that he would continue to encourage peace in Umunede community as well as all parts of Ika North East and the state at large, as the essence of governance is peace, security and welfare of the people.

Hon. Elekeokwuri condemned in its entirety, the destructions carried out by the attackers to his uncompleted residence, his father’s compound and those of some PDP supporters, pointing out that the people must remain resolute in the fight against injustice and darkness.

He stated that the development was alien to Umunede community and wondered why someone he described as a friend and brother should encourage his supporters to start destroying the properties of others in the name of politics.

“I appeal to you all to be calm and vigilant. When one is unpopular, he resorts to violence. This kind of injustice and darkness can never stand in our peace loving community. We have been campaigning vigorously as a party for PDP candidates. We know that victory is sure and on that platform we stand. We must reject violence. It is not part of us and will never be part of Umunede community”, Elekeokwuri stated.

Explaining further, he said “Between 9am to 10am on Saturday, February 16, 2019, they came to this my ongoing project site, shooting sporadically, destroyed a lot of things, attacked my workers and stole their money. Thereafter, they went to my father’s compound, destroyed six of my campaign branded vehicles amongst other items. They also went to Chief Andrew Emeri’s, Hon. Sunday Iheme’s, Chibuzor Obidike’s and Kenneth Onwuegbuosa’s houses, all PDP supporters and carried out one form of destruction or the other. They went into the town pulling down PDP billboards. I have reported to the Police and hope that they will do their job”.

Some of the victims who spoke alleged that the attackers were being aided by two hilux vehicles occupied by policemen, stating that when they were confronted they simply said, “that is politics”.

They said the attackers were over 50 in number, chanting APC and some war songs and inscribing ‘APC’ on the walls of the residents visited including that of Hon. Elekeokwuri.

The victims accused the APC candidate for the House of Representatives election, of masterminding the attacks and wondered why he should embark on such in his community regardless of his ambitions.

Elekeokwuri Addressing his supporters and Constituents

Meantime, the traditional ruler of Umunede kingdom, Obi Ezeagwuna Agadagidi the first, has warned that the attacks on some residents and the destruction of properties witnessed in the community last Saturday should never happen again.

Addressing some residents at his palace, the Monarch stated that Umunede is a peaceful community and should not be turned into a war zone.

Vowing never to allow such happen again in his community, Agadagidi the first, urged politicians to shun politics of rancor and bitterness, stressing on the need to peacefully canvass for the votes of the people and not taking to violence.

He said in democracy, the popular candidate must always emerge victorious not the other way round and emphasized the importance of rancour free elections in the community.

The traditional ruler enjoined the law enforcement agencies to be alive to their responsibilities at all times.

Governor Okowa Calls For Violent-Free Elections, Visits Family of Slain Aide, Ijei
We Are Constructing Roads To Open Our State To Investors – Okowa