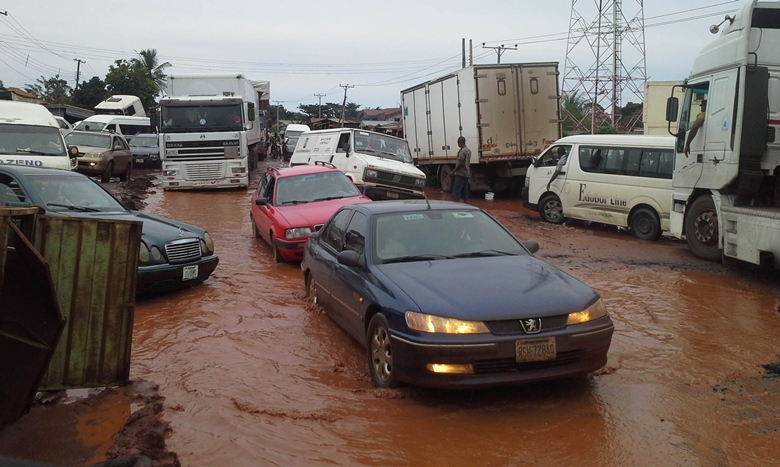 Ekpoma Stakeholders Forum has called on the Federal Government to immediately release the 2017 budgetary allocation for the construction of the Benin- Abuja highway to make the Ekpoma corridor of the road motorable again.

The forum which is a coalition of several professional groups, trade unions, farmers, market women, Civil society organisations in Edo Central Senatoral District made the call at the end of a Strategic  Meeting of the Concerned Ekpoma Stakeholders Forum held on Monday 26th June, 2017 at Ekpoma, Edo State.

The forum decried the abandonment of the the dualization of the Benin-Auchi section of the Benin-Abuja highway with about ten kilometers cut off at Ekpoma, which has led to the destruction of feeder roads in the university town.
It accused the Federal Government of failure to maintain the road which was constructed in the 70s, resulting in untold hardship and stifling social economic activities in the area.

According to the forum “We recall with nostalgia that the Benin/Abuja road was constructed in the early 70s without the necessary maintenance and repairs thereby causing untold hardship to the people. The Benin/Auchi axis of the road at the moment is in its worst state and un-motorable. It has also affected the socio-economic activities of the people.
“The axis was purportedly awarded for dualization/repairs with billions of tax payers money without meaningful execution of the road project. Any shower of rain normally leads to traffic buildup along the federal road spanning over ten kilometers.

“Sequel to this, road users divert to feeder roads within Ekpoma town thereby causing further damage to the roads arising from the articulated vehicles carrying petroleum products, mineral resources and farm produce to and from other parts of the country”, the statement said.

While calling on Edo state government to immediately commence the reconstruction of feeder roads in Ekpoma and it’s environs, the stakeholders also challenged government to tackle the security challenges confronting Ekpoma as their women can no longer go to the farm alone for fear of being raped and murdered.

The statement issued at the end of the meeting said: ” the Federal government should immediately release the budgetary allocation for the repairs and dualization of the Benin/Auchi axis of the Benin/Okene Express road.

“TheFederal Ministry of Works should direct the contractor to immediately return to site.

“The State government should immediately commence the repairs and construction of the feeder roads in Ekpoma and its environs.

“The Edo state government should put the necessary measures in place to fix the roads and guarantee the security of life and properties.

“Also of urgent importance is the state of insecurity in Esan Land ranging from rape to brutal murder of women in their farms by suspected herdsmen. Apart from the aforementioned, is the unwarranted destruction of agricultural produce by the cattles. This has adversely affected the socio-economic activities of the land and have also created fear in the minds of our people who are predominantly farmers.

“All the security agencies should be up and doing in addressing the increasing rate of insecurity in Ekpoma and its environs”, the statement said.

A visit to the University town of Ekpoma by Asaba Metro News revealed that trailer vehicles are lining a stretch of the highway between the University gate and Esan West Local Government Council Secretariat, a distance of about five kilometers.

According to one of the trailer drivers Abdullah Inusa, who was on his way to Funtua in Katsina state, said he has been on that trailer traffic snarwl for more than two days.