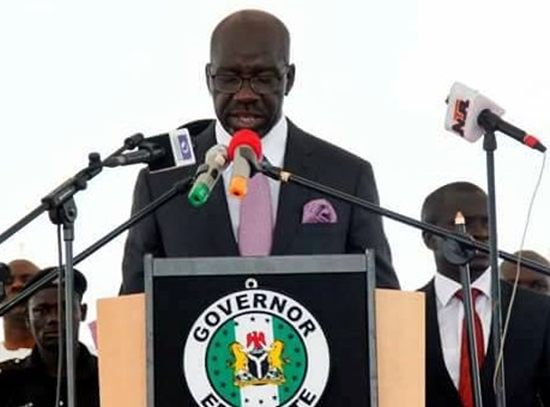 Governor  Godwin Obaseki of Edo state has said the Government House is not a bank where people go to collect money but a place to render service.

Obaseki said this while receiving executive members of Women’s wing of All Progressive Congress (APC) on Tuesday Janaury 31, 2016, in the state in Benin.

According to him, I don’t have money to give anybody; the money I have is to work for the people.

“I can create money going by my experience as an investment banker; I can organise things and people must be ready to work,’’ the governor said.

He told the women that the days had gone when politics was about money sharing.

‘’The question is what do you do with the political power. It is our level of commitment that gets us where we want to be.

‘’People should be ready to work. We should prioritise and cut waste because our biggest problem is waste.

‘’God chose me for a purpose to change things at this time and politics of money and sharing is not possible,’’ Obaseki said.

He commended the party women for supporting him during the 2016 governorship poll in the state and urged them to be the vanguard of the new politics.

He called on the women to partner the government in the development of the state, especially in the area of ensuring quality basic and technical education for their children.

In her remarks, the APC women leader in the state, Dr Aisosa Amadasun, commended the governor on his victory at the polls and pledged their support to the success his administration.

Amadasun said that the visit was to solicit the fulfilment of the United Nation’s mandate of 35 per cent appointment position for women in his administration.