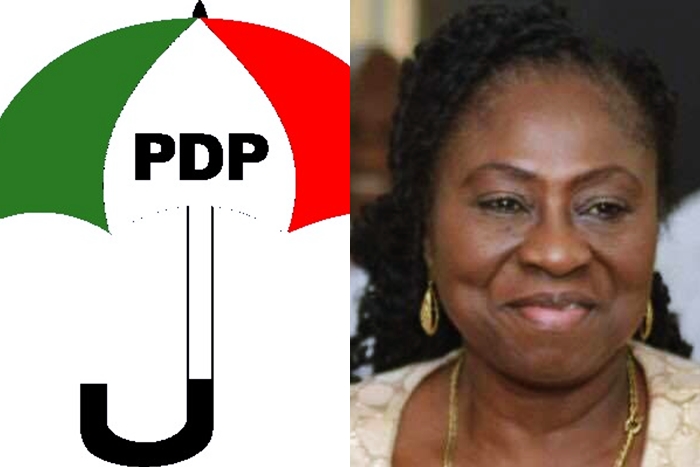 The Edo state chapter of the Peoples Democratic Party (PDP) has insisted that the former Speaker of the State House of Assembly, Honourable Elizabeth Ativie must return all the four government vehicles in her possession or face prosecution for stealing of government property.

The PDP made its position known Wednesday against the backdrop of the return of three of the four official vehicles in the possession of Edo state former Speaker and ex-deputy speaker, Honourable Elizabeth Ativie.

Honourable Elizabeth Ativie had Tuesday returned three of the four vehicles attached to her as deputy speaker to the speaker of Edo State House of Assembly, Hon. Adjoto Kabiru, stating that she is making efforts to retrieve the forth car from the buyer whom she sold the official Sports Utility Vehicle, SUV to.

Ativie had insisted she would not return the official cars attached to her office as deputy speaker after her impeachment, claiming former Governor Adams Oshiomhole gave her the cars as personal gifts.

In a swift reaction Oshiomhole last week denied giving her the cars as gifts adding that as Governor of Edo state then he lacked the powers to give out government vehicles as gifts especially as the vehicles belong to another arm of government.

However, the state PDP  in a reaction to the development insists she must return all the vehicles as a condition for withdrawing its petition to the EFCC and ICPC or face prosecution.

In a statement  signed by Chris Nehikhare, the state publicity Secretary of the party, observed that the admittance of conversation of government vehicle in question by Hon. Ativie in her letter is revealing and damning.

While viewing the excuse that she will get in touch with the buyer of the fourth vehicle as lame, the statement warned that the party will be constrained to pursue the legal option to a logical conclusion if the vehicle is not returned to the State House of Assembly.

According to the statement “You will recall that Edo PDP wrote a petition to ICPC and EFCC regarding the criminal conversion of government vehicles to personal acquisition by Hon E. Ativie. This prompted us to instruct our lawyers to seek an order of Mandamus from a competent court of law, if ICPC and EFCC fails to investigate and act on the petitions within seven working days from the receipt of the petition.

“We are informed  that arising from the petition of our lawyers and realising the unpalatable implication of what will befall those involved in this shameless illegal acquisition of government vehicles, Hon Elizabeth Ativie has returned three of the four vehicles back to the state, with the lame excuse that she is trying to get in touch with the buyer of the one she allegedly sold. However, from her letter to EDHA, Hon Elizabeth Ativie has admitted conversion of government property which in itself is damning!

“Bearing in mind our Thursday deadline for ICPC and Friday for EFCC, we wish to state that, if she returns the vehicle before the deadlines elapse, we will instruct our lawyers to withdraw the petitions. However, if she doesn’t, we will have no other option but to pursue the legal option.”

While appreciating the support of Edo people in its efforts to enthrone probity and accountability in public life, the PDP hopes that the experience will serve a lesson to all especially the ruling APC in the state.

“While we await her action to return the vehicle, we appreciate the wonderful support our efforts enjoyed from Edo people. We sincerely hope that the lesson learnt from this action will impact positively on our democratic culture and humble the Edo APC government” the statement said.