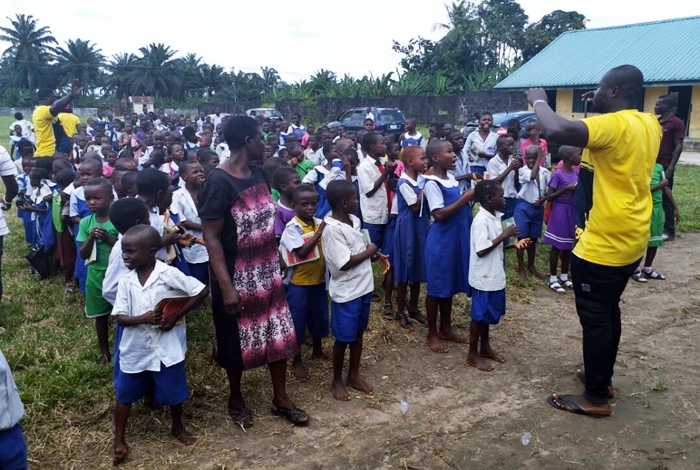 …Puts Smiles On Faces Of The Needy

For some, money is made for the sake of it. For others, it is made so it can be used to serve humanity. Philanthropy is all about the latter and that is what money means for Engr. Edafe Unuezi Oduh.

Bothered by the level of poverty in Isoko nation of Delta state, South-South Nigeria and his love for education, Engr. Edafe Unuezi Oduh, who hails from Aviara, Isoko South local government area of the state, established the Edafe Unuezi Oduh Foundation through which he would empower his people especially the empowerment of widows, pupils, and students among others.

The bible puts it poignantly, money, it says, answereth all things. Indeed, in human existence, the most important thing after God is money. That is why wealthy people enjoy exalted and respected position in society, especially those who use their money to serve others. For such people, wealth is nothing if it is not used to serve God and humanity, to empower the poor and the less-privileged in the society. In other words, money is nothing if it is not used for what is generally called philanthropy.

That is the way Isoko youngest philanthropist, Engr. Edafe Unuezi Oduh, looks at wealth, something to be used to help the poor and the less privileged around him. There is evidence of this personal conviction aplenty around Oduh.

Speaking to Newsmen on what informed the establishment of the Edafe Unuezi Oduh Foundation, the founder and Chief Executive Officer, (CEO) of the foundation, Engr. Oduh Edafe Unuezi, said the foundation was established because of his love for education and the less privileged, the widows and orphans in the society.

“To provide relevant and sustainable education and mentoring, for economic and social empowerment for the poor and less privileged, in order to help them achieve their dreams and aspirations. We believe that the Lord God Almighty, the creator of the heavens and the earth owns the wealth of the land and desires that all prosper in the Land. 3 John 2.

“We believe that those who are custodians of the wealth of God need to provide for the less privileged that all creation might flourish and give God glory. Every person should have the opportunity to achieve his dreams and aspirations and obtain a Solid foundation for a successful life.

“To engage in charitable activities that will advance the social and economic wellbeing of the less privileged through the promotion of sustainable education, mentoring and skills acquisition.To harness and focus the potentials of the less privileged for the social and economic growth and development of Isoko nation and indeed Delta state and Nigeria.” He said.

The foundation which has also embarked in the distribution of textbooks to primary and secondary schools in Isoko nation has given out over 50,000 books in its back to school programme.

Araya Primary School, Araya, all in Isoko South have also benefited from the foundation while at Umeh community, Isoko South local government area, during Umeh Carnival held in October 1st, this year, the founder of Edafe Unuezi Oduh Foundation, Engr. Edafe Unuezi Oduh and members of his team stormed Umeh to witness and celebrate the annual Umeh Carnival with the community and the founder catches on the opportunity to present 250 notebooks as part of his back to school programme to the President General of the community.

According to the founder of the foundation, “I must say that poverty has ravaged the face of Isoko and to an extant when we go through schools and we see some kids running with bare foot, it is very painful that you see the younger ones running with bare foot. Some of them don’t even have notebooks. God willing the foundation will do more than what we are doing now in schools across Isoko land. You won’t believe what saw on ground, the experience is really very bad.

“The level of poverty in the land is so high, I must tell you the truth. For the books the foundation is giving out to schools, you know sometimes ago when we were kids, we find it difficult, when school is about to resume our parents run helter skelter. So, this foundation saw it as a paramount importance to help the younger ones since they said when you invest in kids in education, it brings a return to the society. So, that is why we embarked on the back to school programme by giving them the little we can from the foundation which is the books that we have giving.

“Presently as we speak now, we are organizing a free JAMB lectures. And under the free JAMB lecture we are coming up with a scholarship scheme for the best students from Isoko North and South. By the special grace of God, the foundation shall carter and see them through the higher institution. Presently we are trying to deliver some chairs to Adam Igbudu Memorial Secondary School, 50 chairs to be precise and few days ago it was brought to my notice too another school in Iyede, Iyede Commercial Secondary School, they also lack chairs which the foundation is also looking forward to provide.

“In Oleh, there is a school, Uzi and Owara primary schools. We are still looking at how we are going to fix the classrooms there. The headmaster’s offices in the two schools are bad and the foundation attention was drawn to that. So, in the next couples of days they will be renovated for habitation because conducive environment is a key to better learning.

“The Edafe Unuezi Oduh Foundation is also the sponsor of the ongoing Isoko unity cup 2017. For some time now, there has been no peace in Isoko nation and I came up with the football competition so that we can bring unity to the Isoko nation. We believe so much that when a competition like this is taking place it brings unity among the communities. So, that is why the foundation embarked on this football competition.” Oduh stated.

On what he would want to be remembered for, founder of the Edafe Unuezi Oduh Foundation, said he is not doing what he is doing for people to pay him back. “Well, the fact is when you do good, you don’t expect people to pay you back with anything. You are just doing it because God placed it in your heart to do this good thing. God knows my reward that he has for me. No human reward is attached to what I am doing. It is just a philanthropic work, there is no motive towards that, it is the foundation’s nature to do this work, to just put a smile on humanity, there is no motive, it is just the goodwill.”

On his message for the Isoko nation, founder of the Edafe Unuezi Oduh Foundation, has this to say. “The only thing that I will say is that we the Isoko sons and daughters, if we can put ourselves together and work as a team, Isoko will be a greater nation. The well to do Isoko sons and daughters should come back home, let us work and bring Isoko to limelight. Like they say, no place is like home. When the foundation is properly laid, the building will be solid. So, I say to my fellow Isoko people that they should come back home and join hands with us to build our fathers’ land which is Isoko. We don’t have anywhere to call our home apart from Isoko. Tomorrow you can boast of where you are from if the place is good and its worth living.

His message for the Isoko youth, the youngest Isoko philanthropist, admonished the Isoko youth not to look down on themselves “Because like they said, when they see the youth they say they are touts but I want to let them know that when you know what you are carrying, no matter the challenges, you won’t look down on yourself. All I just want to tell them is that they should believe in themselves and they should know that they are the leaders of tomorrow and the tomorrow is now. Let them have this courage that they have something that they can offer to the society, no matter how small it is.”