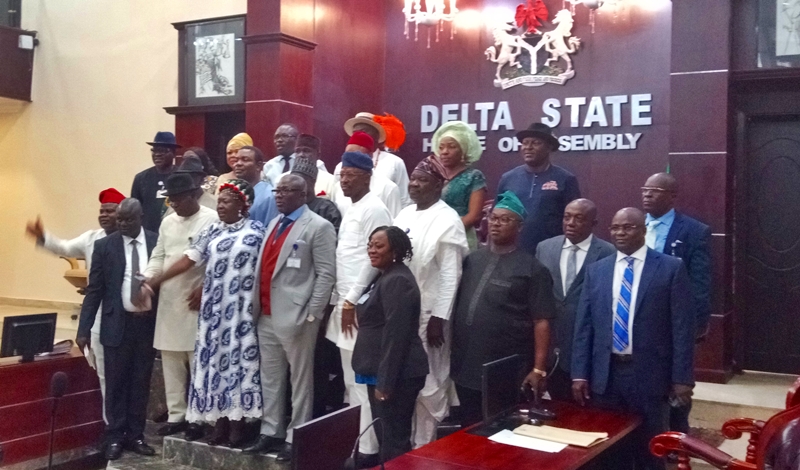 The Speaker of the Delta State House of Assembly, Rt. Hon. Sheriff Oborevwori has said that the Sixth Assembly fared very well, saying feats recorded could not have been possible without the cooperation and support of members.

According to him, out  of the Bills received by the House forty-nine (49) were passed, two (2) fell through the legislative processes, six (6) were merged and twenty-six (26) are still pending in the House.

He however said that out of the 49 Bills that were passed by the House, forty-five (45) of them were assented to by the Governor, His Excellency Senator Dr. Ifeanyi Arthur Okowa.  Four (4) of the Bills were however not assented to.

The Speaker stated that during  the period under review, the House also received One hundred and seventy-seven (177) Motions which include Requests from the Executive Arm of Government, adding that the  House considered the Motions/Requests and approved One hundred and seventy-five (175) of them and Two (2) of the Motions were rejected by the House.

“Furthermore, the Sixth Assembly synchronized with the Executive Arm of Government to hasten development to the nooks and crannies of the State. We were able to achieve this because we regarded the State budget as the most essential policy tool for development. To the credit of the Sixth Assembly, the Appropriation Law, that is, the State Budgets for 2018 and 2019 were presented, considered and passed at record time. Both Budgets were assented to in December 2017 and 2018 respectively”, the Speaker said.

Rt. Hon. Oborevwori added; “Away from Bills and Motions, the Sixth Assembly also placed premium on human capital development.  To attain excellence in our duties, members of the Sixth Assembly were afforded training in one of the best schools in the world. Members and top management of the House were trained in Management and Leadership skills by the famous and reputable London School of Economics in 2018.  Legislative prowess of members were also boosted in 2017 at the International Law Institute, Washington DC.”

He  said when  the Sixth Assembly was inaugurated in June 2015, members  met regular power failure challenges on ground, adding that the  light was not stable in the office and at the quarters.

“The situation was an impediment to our work. The leadership of the House with the support of members migrated the office and the quarters to the 33 KVA line. Today, the House now functions with minimal power interruption”, he said.

In addition, he said,  the Sixth Assembly also took seriously the welfare of the staff of the Assembly, saying the controversial issue of staff outfit has been laid to rest with  Staff now receiving their outfit allowance along with their salaries at the anniversary of their employments.

He said; “The leadership of the Sixth Assembly has also maintained and sustained the Assembly’s Clinic. The clinic provides services for members, political aides and staff of the Assembly”.

“My dear colleagues, we could not have achieved these feats without your cooperation and support”, he said  and expressed gratitude to the Principal Officers and all members of the House.

In his words;  “My dear colleagues, the Sixth Assembly was a great team, regrettably, some of our colleagues are exiting from the House now. Nonetheless, they remain forever non-sitting members of the Delta State House of Assembly. For those members that are leaving, I wish you the best of luck in your future endeavours. I also request on behalf of the House that any time your knowledge and services are needed, you would be kind enough to make yourself available for us”.

“On this note, I want to sincerely thank God Almighty for seeing us through these four years. According to Romans 9:16 God says “so then it is not of him that willeth, nor of him that runneth but of God that showeth mercy”.  I therefore return all the achievements, successes and glory back to God”, he said.

The  Speaker  thanked the  state Governor,  Senator Dr. Ifeanyi Arthur Okowa, for his support and understanding for the House, pointing out that; “He is one man that respects the fundamentals of the separation of powers that exist among the three arms of government.  We are grateful to you sir”.

Rt.Hon. Oborevwori  also thanked their constituents for giving them  the opportunity to represent them in the Sixth Assembly, noting that;  “Life is an opportunity for continuous learning. No one is perfect. If in the course of discharging our duties we have erred in any way, I ask on behalf of all the members for your forgiveness. It may not have been done deliberately. I also know that in public service, ones actions may not be acceptable to all persons at the same time. Sometimes, the dissenting views might be cogent. But I want to assure you that whatever we did as a House was for the good of the State”.

The Speaker commended  the Clerk, Management and staff of the Assembly for their support for the leadership and members of the House and said that; “I must tell you, we enjoyed working with your team. The Assembly staff are one of the best in the country. We ask that you keep up your good work for the Seventh Assembly. I also want to appreciate our Aides, we acknowledge all your efforts and support for us. Thank you for being there for us”.

Inauguration Thanksgiving Service: The Lord Has Gone Ahead Of Us, We Cannot Fail – Okowa
NUJ Congratulates Governor Okowa On Successful Second Term Inauguration