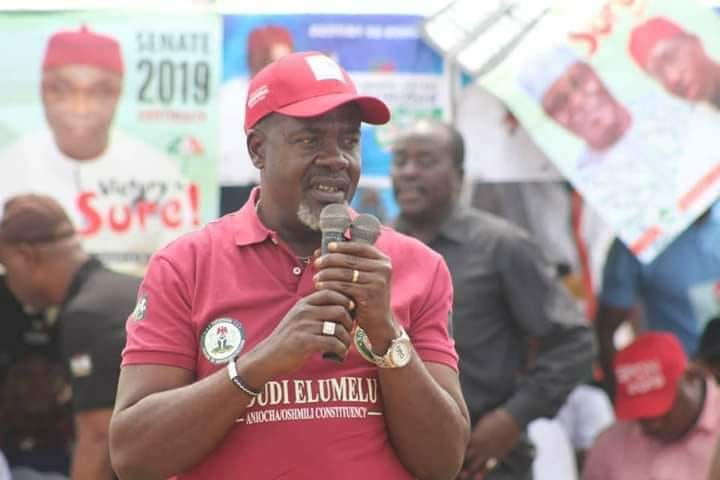 The Delta North Chairman of the Peoples Democratic Party (PDP), Hon. Moses Iduh, has called on Deltans not to waste their votes on persons who have already lost the election because of their inability to fulfil the promises they made when they were seeking the mandate of the people to take over the mantle of leadership.

Hon. Iduh, who spoke during the continuation of Delta North PDP campaign to ward 3 (Obomkpa, Idumuogo and Ugboba), ward 4 (Onicha Olona), wards 6 and 7 ( Issele Uku), and ward 10 (Ezi) in Aniocha North Local Government Area, observed that Deltans have suffered untold hardship under the present Federal Government and the need to flush them out cannot be overemphasized.

He enjoined them to vote for Alhaji Atiku Abubakar as President, Senator Peter Nwaoboshi as Delta North Senator and Hon. Ndudi Elumelu to represent them at the House of Representative during the February 19, 2019 election and vote for Senator Dr. Ifeanyi Arthur Okowa as the Governor and Hon. Emeka Nwaobi as member representing them in the Delta State House of Assembly on March 2, 2019.

The Chairman, Delta North Campaign Council of the PDP, Chief Goodswill Obielum, stated that they were in the area to appreciate them as well as remind them that the time to return all PDP Candidates has come, urging them to ensure that no vote is lost to another party by coming out to vote and ensure that their votes were correctly recorded before leavng the polling station.

The Director General, Delta North Campaign Council, Hon. Pascal Adigwe, called on the people not to be fooled by self seeking individuals claiming to be their saviour whose intention is to mislead the people and devour their commonwealth.

At Onicha Olona ward 4, the state Commissioner for Culture and Tourism, Hon. Emma Chinye, assured the party stalwarts that the town has no other party hence the assurance is that 100% of the vote cast will be for PDP and all the candidates in Delta North Senatorial District, stating that Onicha Olona has always belonged to the PDP how much more now that they Governor Okowa has littered the community with developmental projects.

PDP leaders in the campaign team are the state Commissioner for Water Resources, Chief Fidelis Tilije, former Speaker of the State House of Assembly, Rt. Hon. Martins Okonta, the Chairman of the state Civil Service Commission, Chief Nkem Okwuofu, the state Secretary of the PDP, Chief Obi Nzete, and the Director General of Senator Peter Nwaoboshi Campaign Organization, Chief Frank Nwugo amongst others.

Ndokwa East Local Government Area is to play host to the campaign team on Thursday and Friday.