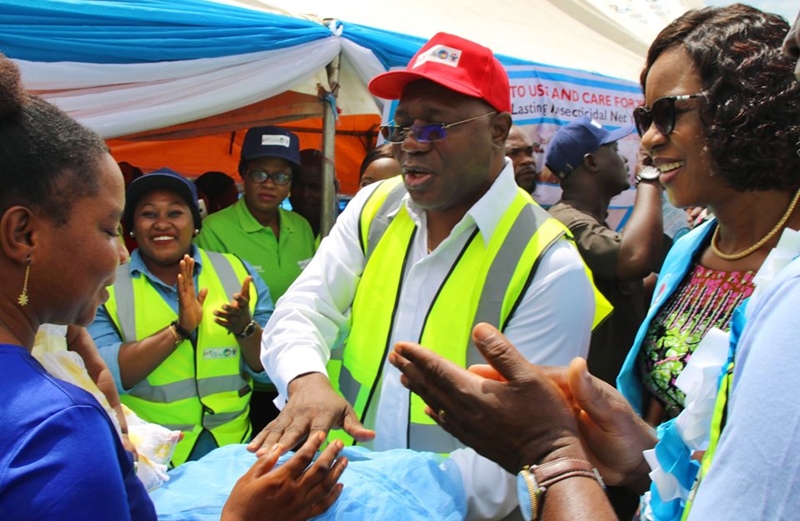 The colourful ceremony which took place on Friday, June 7, 2019 at the Event Centre along Okpanam, Asaba, witnessed the distribution of the first sets of Nets by the State Deputy Governor, Deacon Kingsley Otuaro and the First Lady of the State, Dame Edith Okowa who is also the State Net Ambassador.

In his speech, the Governor of Delta State, Senator Dr Ifeanyi Okowa represented by the Deputy Governor, Deacon Kingsley Otuaro appealed to Deltans to collectively fight the scourge of Malaria which he claimed can be eliminated if all work assiduously to achieve that aim.

Governor Okowa stated that Nigeria contributes a quarter of the Malaria burden in Africa, as 97 percent of the population in Nigeria is at risk and it is responsible for about 66 percent of all clinic attendances and poses a huge challenge on our developmental efforts.

He pointed out that the Long Lasting insecticidal Nets Campaign is therefore a serious and practical commitment of the state government towards the healthcare of the people, stressing that human development begins with ensuring that the people are healthy.

Okowa explained that “we believe that prevention is the best approach to taming the scourge of Malaria, given the emergence of parasites resistance to arteemisinin, the essential ingredients for artimisinin-base combination therapy (ACTs) which is used in the treatment of the disease.”

He affirmed that as part “of our urban renewal efforts, is the determination to reduce the effects of flooding in the state, by clearing drainages, while new ones are being constructed in areas where they are needed. It is a fact that clean drainages are bound to reduce breeding grounds for mosquitoes, which is the causative agent of Malaria.”

Governor Okowa stated further that apart from calling on Deltans to keep their environment clean, and free of containers with stagnant water, there will be aggressive campaign to ensure that every household in the state gets at least two sets of the long lasting treated mosquito nets.

He charged Deltans to make use of the Nets, more importantly, since they are not for sale, because they have been paid for by the government and anyone caught collecting money before giving out the net would be regarded as working against the people and government interest.

The Governor assured that his government remain committed to its citizens as their programmes and policies are aimed towards the empowerment of the people through good health and capacity building in order to stimulate self employment, appealing that all should take advantage of this health programme to improve on their health status.

The wife of the Governor, Dame Edith Okowa in her speech, appealed to Deltans to always make good use of the free mosquito nets so that they could always maintain good health status.

She charged Deltans to ensure they keep clean environment, remarking that dirty environment is a breeding ground to mosquitoes, and that Malaria scourge is on the increase in the state, therefore all hands must be on deck to halt its further spread.

She appealed to Deltans to always pay their bills to private waste disposals so that Delta state environment would be neat at all time since government alone cannot be responsible for making the environment clean, appealing strongly that, people should always sleep in their Nets to avoid mosquito bites.

Goodwill messages from WHO, CRS, SFH, CHEMONICS and other partners of the Long Lasting insecticidal Nets Campaign, applauded the effort of the Delta state government in achieving universal health coverage for its citizens. They also appealed for the support of the state government in ensuring a hitch free distribution exercise.

High points of the event were the demonstration of sleeping in the mosquito net by the State Governor and subsequent distribution of nets to the first set of beneficiaries of the over 3.5million Long Lasting insecticidal Nets billed for distribution in Delta State.