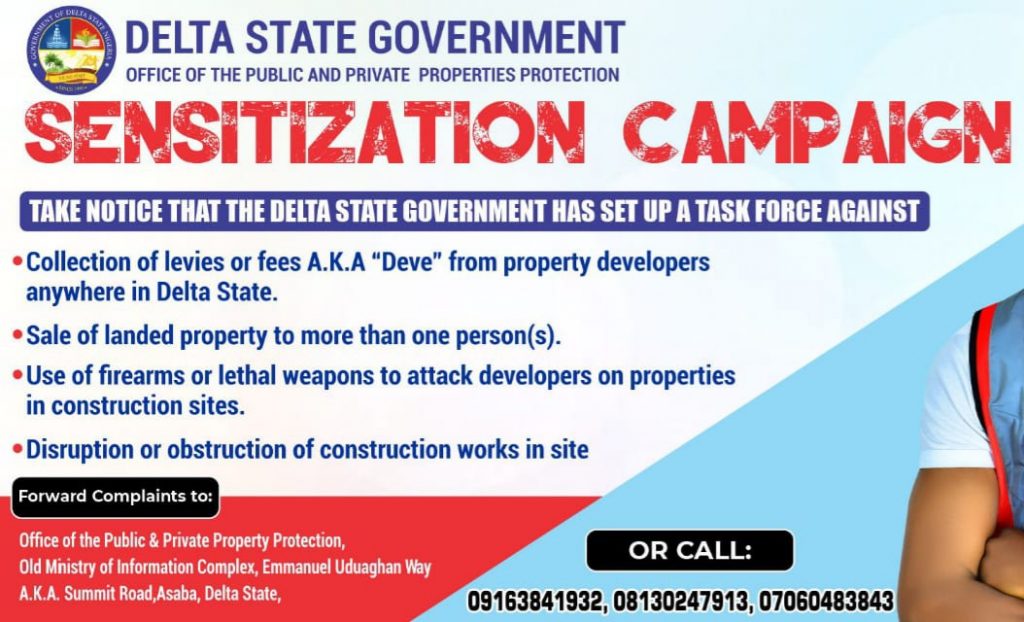 Respite has finally come the way of property owners and developers in Delta as the law prohibiting collection of levies, otherwise referred to as ‘deve’, has come into force in all parts of the state. The law recommends seven years imprisonment or a fine of one million Naira or both for offenders found guilty by the court of law.

Other offenses in the law include sale of landed property to more than one person, use of fire arms or lethal weapons to attack developers on construction sites, disruption of construction works, vandalisation of either public or private properties, unlawful encroachment into private or property without permission.

Barr. Michael Onyarin, Director Of Operations at the office of the public and private property protection, the office empowered by the state government to enforce the law, told Journalists in Asaba when enforcement officers of the agency engaged on a sensitization tour around Asaba, Okpanam and environs on Wednesday, July 13, 2022.

The officers moved through Summit Road, to Maryam Babangida Way, entering the premises of the new state secretariat and down to Okpanam, a growing community in Oshimili North local government area of the state. Findings show that Okpanam is one of the areas where the business of ‘deve’ collection thrives in Delta.

During the tour, the team led by Barrister Onyarin told Asaba residents and Okpanam that the days of ‘deve’ collection were over, adding that henceforth, anyone caught engaging property developers with the aim of extorting money from them, would be prosecuted and if found guilty would spend seven years in jail.

Over the years, property developers of all kinds across the state have shared woeful tales of experiences with youths who had obstructed their construction sites, stopped building works until specified amount of money is paid to appease them. This has been recurring issues across the state.

The team warned youths to get engaged with meaningful ventures and abandon the years of reliance on ‘deve’ collection to earn a living. They also warned against property vandalisation and a selling one parcel of land to several persons with the aim of amassing unmerited money.

In an interview with Barrister Onyarin, he said: “The law was enacted in 2018 by the Delta state house of assembly. Over the years, there has been ‘deve’ collection, selling of one property to different persons, thereby causing confusion. This has caused menace across the state. The law is therefore aimed at to eradicating all these menaces from the state.

“People have been complaining. Today, we are carrying out sensitization campaign to make members of the public aware of the illegal activities that have proscribed by the law. We want people to know that it is wrong to pay ‘deve’ to these youths.

“The state considers it necessary to stop this menace in the state. It is hindering development. We are out to bring to people’s knowledge that there is a law against deve collection and the law prohibits the illegal activities of these people. Once, people are aware they can always make complaints to the office, the police can now take it up from there.

“The law has several penalties. The limit is seven years imprisonment or option of fine of one million Naira or both. Over the period of time, there has been no enforcement team. Last year, this office was created. Now, measures have been put in place to bring the law to action. Members of the public have been asking for the enforcement of the law. And we are now out to enforce the law.

“We cannot stop the collection in a short period of time, but it’s been in progress. We are mapping out strategies. The modus operandi is lay your complaints to the office and we will take it from there. Our advice is that developers should stop paying deve.

“If you pay deve, you have broken the law. You are encouraging the menace to thrive. The boys will not force you, they will only come to site and stop activities going on. Within that period, stop work, report to the office and we take it up from there.”