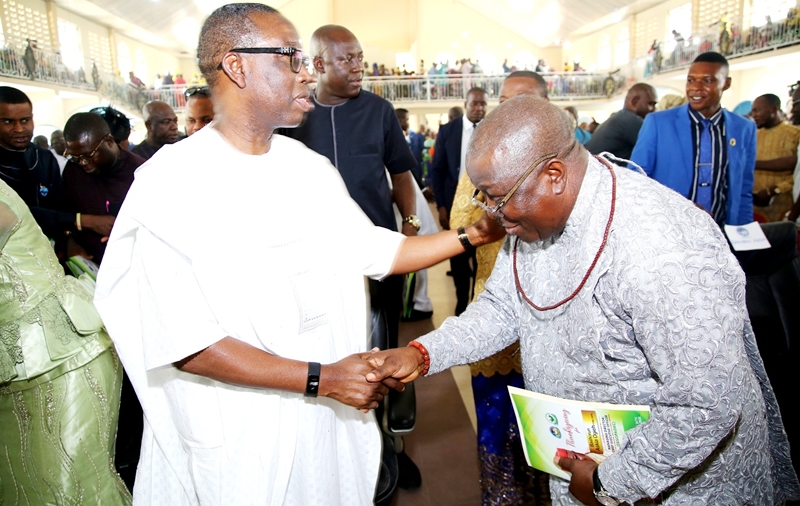 The Managing Director/Chief Executive Officer of Delta State Oil Producing Areas Development Commission (DESOPADEC), Bashorun Askia Ogieh has pledged his total commitment to deliver the mandate of the Commission to the people of the oil bearing communities of the state and Deltans at large.

Bashorun Ogieh who made this promise at a Thanksgiving Service in honour of his Appointment held at St. Matthias Catholic Church, Uzere in Isoko South local government area on Sunday, January 26, 2020, stated that, the appointment by the state governor was a privilege to serve his people.

He said: “As we have it in our local cliché, to whom much is given, much is expected. Your Excellency, I do not take lightly the huge confidence you reposed on me and my team with our appointments. It is a call to duty, a call to build a Delta primed to equip our people with the wherewithal to become entrepreneurial and by creating a clement environment for them to achieve their potentials. I will not fail you. I will not fail our good people of Delta State.

“To our people in the oil producing communities, I pledge that under my watch, we will be engaging and liaising with you in decision making. In project execution, the desires and priorities of the communities will be paramount. This is an effective way of making the people buy into and own the projects in their areas.”

Appreciating Governor Okowa for the appointment, the DESOPADEC MD said, “I specially thank and express my deep appreciation to His Excellency, Senator (Dr.) Ifeanyi Arthur Okowa, our amiable Governor, who has in various ways enhanced and ensured my political trajectory in Delta State and beyond.”

Adding, “Your Excellency, I appreciate that you let me into where the political paddle of Delta State is hidden and the Canoe has been sailing smoothly even in rough waters. My gratitude knows no bounds. It is profound. And you know, it is without regrets. For me, it is the right thing to do, to effortlessly show immense gratitude to you.”

The visibly excited Bashorun Ogieh also thanked all those who had played various roles in his life and declared that his BASHORUN ASKIA FOUNDATION (BAF) will continue more than ever to carry out empowerment activities that will elevate the status of his people.

In a homily at the thanksgiving service, Catholic Bishop of Warri Diocese, Most Rev (Dr) John Okeoghene Afereha who vehemently spoke against corruption in Nigeria, likened it to Siamese Twins with terrorism in terms of their negative impact on the ordinary citizens of the nation.

Thanking Bashorun Askia Ogieh for his contribution to his people and the development of his Uzere community in the past through the Bashorun Askia Foiundation (BAF), the bishop charged the DESOPADEC Managing Director, to discharge the responsibilities of his new position with the fear of God to use the agency’s resources judiciously out of genuine love for the people especially in his mandate communities.