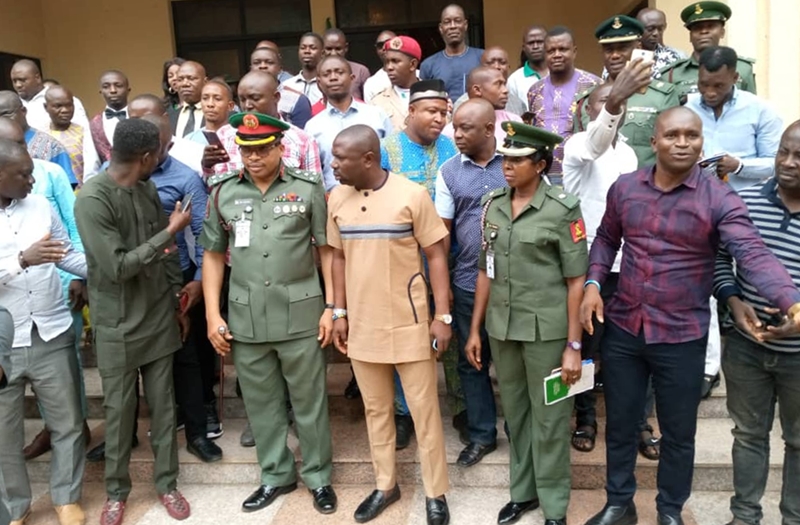 The youths of Delta State under the Nigerian Youth Council, Delta State Chapter were on Wednesday 11th March, 2020, infuriated at the attitude of the Nigerian Army who called them out from their various local government areas to sensitize them on the proposed military recruitment and left them thereafter with nothing at the end of the programme.

The youths were seriously angry with the Delta State Government who called them out without adequate arrangement with the Army on how to transport them from their different locations to Asaba and same from Asaba back to their locations.

This heated argument ensued at the Unity Hall of Government House, venue of the Army Recruitment Sensitization Programme, where a member of the State Directorate of Political and Security Services, Mr. Atima Godwin had gathered the youths to address them after the event.

Mr Atima Godwin had told them that it was unfortunate that the Nigerian Army did not provide fund to cater for the youths’ transportation and other logistics, adding that the State Government was only informed to help gather a handful of youths to be sensitized.

The staff of the Directorate affirmed that in his wisdom he chased after his Permanent Secretary immediately after the programme to appeal for cash to transport the youths back to their destinations. He said because there was no cash, the PS was only able to provide N2,000 each for every youth who participated at the event.

He appealed to the youths to kindly accept it, adding that the Directorate was not carried along and eventually the Army abandoned this critical aspect for them to handle.

Meanwhile, some youths shouted him down while he was still speaking, claiming that those who came from Burutu spent more than N2,000 to ferry through water to Warri, not to talk of transporting from Warri to Asaba. And they would also go back with the same or more.

However, in the wisdom of the Chairman of Delta Youth Council, Comrade Kenneth Okorie, he pacified his members and told them not to bother but to accept the token as it was.

The Nigerian Army planning a nation wide recruitment, had sent representatives to go round the States to sensitize youths on the need to make themselves available for recruitment into the military.

Brig. Gen. Emmanuel Akpan was sent from Army Headquarters in Abuja to carry out the sensitization in Delta State.

He spoke on the processes and criteria for recruitment, harping more importantly on physical and medical fitness of youths between 18-22 years of age for those with Senior School Certificate and between 22-26 years of age for graduates coming in for short service.

It was more of interactive session and so questions were asked and answered while clarifications were sought and suggestions  equally made by the youths in some grey areas of the recruitment.

Akpan debunked the insinuation that the North of Nigeria was always given preference in military recruitment over and above its Southern counterpart, thereby creating unhealthy disparity in the system.

The youths also raised questions on why the Nigerian Army would require four credits including Maths and English from school certificate holders in the South and when it comes to the North it doesn’t matter.

They equally frowned on the idea of making recruitment processes cumbersome for the youths, for example asking them to get a General from their community to attest or reference them when they could have just made it so simple, because according to them not every community had produced Generals in the Army and even if they had, the difficulty in reaching them was another issue.

Moreover, Brig. Gen. Akpan was intelligent enough to answer most of these questions and proffer needed solutions, but however, was swift and tactical to avoid some knotty questions for security reasons.