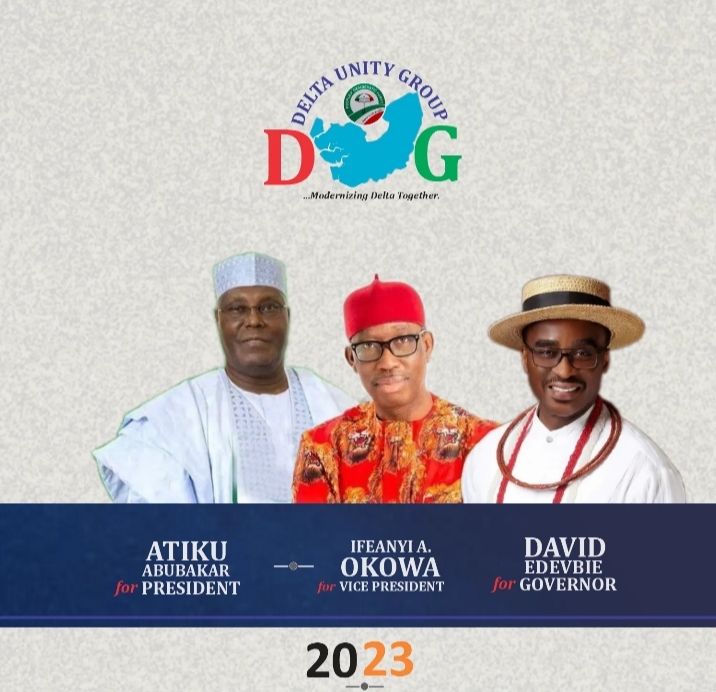 A new political pressure organisation, Delta Unity Group, has called for the unity and commitment of all Deltans to the success of the Atiku/Okowa PDP Presidential ticket as well as the Delta Governorship mandate of Olorogun David Edevbie in the 2023 General Elections.

The call is the highpoint of the communique issued by the group at its first General Assembly held in Kwale, the headquarters of Ndokwa West LGA, on Wednesday, August 17.

The Delta Unity Group, a convergence of long standing, prominent and emergent leaders of the Delta State Peoples Democratic Party (PDP) drawn from all Senatorial Districts, Federal Constituencies, State Constituencies and Local Government Areas across Delta State, stated that its objective is primarily to promote unity and brotherliness within the Peoples Democratic Party and among all Deltans for cohesive grassroots mobilisation towards the success of PDP candidates at all levels.

In his welcome address to members, the Protem Chairman of the group, Rt Hon Peter Onwusanya, one time Speaker of the Delta State House of Assembly who also signed the communique explained that the Delta Unity Group is an all inclusive and unifying force of all ethnic groups, political interest groups and component parts of Delta State, for the actualisation of a peaceful, united, modernised, industrialised and progressive Delta State.

“Specifically, the Delta Unity Group is geared to promote and protect the structure, image, ideals, ideology, interest and integrity of our great party, the People’s Democratic Party (PDP) at all levels.

“We are all witnesses to the difficulties our great party, the Peoples Democratic Party, is going through at this period of transition. As long-standing party faithfuls and leaders at various levels, we cannot stand and fold our hands to see the mother-goat suffering the pain of labour while tied to a stake.

“The birth of Delta Unity Group has therefore been necessitated by the need to support our party and our state to cross the bridge to usher our people into a glorious destiny driven by the Modernisation Agenda of our dear brother and leader, Olorogun David Edevbie, the PDP candidate for the elections next year.

“Added to that is the privilege of having our dear Governor, His Excellency, Dr Ifeanyi Okowa, as the Running Mate to His Excellency, Atiku Abubakar in the forthcoming Presidential Election.”

Pointing out that the Atiku/Okowa and David Edevbie tickets at the Presidential and Governorship levels, respectively, are significant in the realisation of the destiny, development and growth of Delta State and therefore non-negotiable, he cautioned that “the actions or inactions of PDP faithfuls and Deltans at large may make or mar the hopes of the people.”

“It therefore behoves on us as party leaders and faithfuls to come together to provide direction and strong support in promoting the unity of members and to galvanise greater strength towards mobilising not just members but the electorate towards diligently discharging the great tasks ahead to ensure the victory of all our candidates at all levels.”

Arising from these realisation, the group resolved to “fully support the HE Abubakar Atiku/HE Ifeanyi Okowa “Rescue Nigeria” Presidential ticket of the PDP and to work assiduously across Delta State, the Niger Delta and South South Zone to ensure the victory of the party in the 2023 Presidential Election.”

The group declared that “without prejudice to the pending appeal over the candidacy of Delta PDP for the 2023 Governorship election,” it “stands firmly with Olorogun David Edevbie as the lawful and authentic candidate of the party in line with the unambiguous declarative judgement of the Federal High Court, Abuja, and commits to ensuring the total victory of the PDP in the 2023 Governorship election.”

In this regard it called on the national leadership of the PDP “to show characteristic example in abiding by the Rule of Law and to promptly forward the nomination of Olorogun David Edevbie to the Independent National Electoral Commission in line with the subsisting order of court, unless and until there is a contrary order.”

It also urged “all Deltans to embrace the Modernisation Agenda of Olorogun David Edevbie as the only sure manifesto for the sustainable socioeconomic development and growth of the state and the prosperity of all Deltans.”

While it called on leaders of Delta PDP at all levels to show greater commitment to the unity of the party and put its interest as paramount in all their interactions and activities,” it also “advised the State Chairman of the Party to always play the role of an impartial arbiter in the handling of all emerging disputes” and implored all party members, as well, to restrain themselves from making negative and provocative statements about the Party’s candidates at all levels in order to ensure unity, peace and sanctity within the Delta PDP family, as we work towards the overwhelming victory of all our candidates in 2023.”