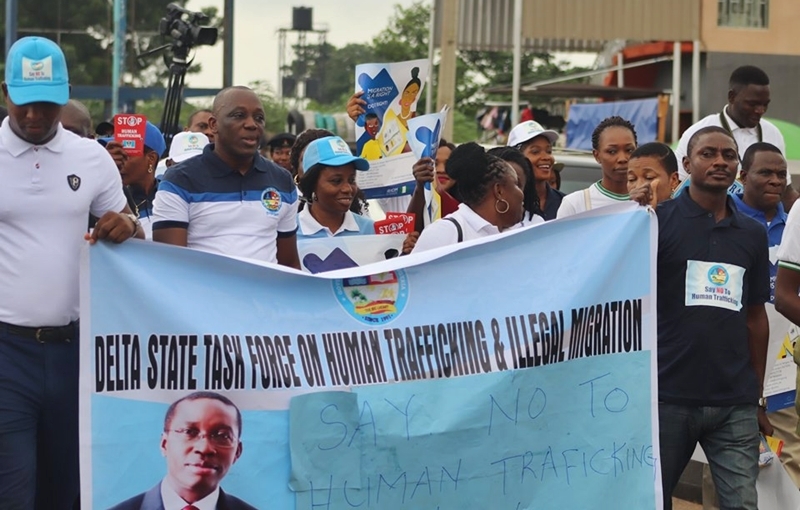 Celebrating the 2019 World Day against Trafficking in Persons, the Delta State Task Force on Human Trafficking and Illegal Migration alongside several civil societies around the state on Thursday, August 8, 2019, took to the streets of the state capital to sensitize youths about the danger of being trafficked. Speaking after the rally, Attorney General of the State and Chairman of the Task Force, Barr. Peter Mrakpor described the issue of trafficking as a clear and present danger that must be tackled.

He emphasized that most people who get trafficked are never successful, stating that, it is like a spirit, so we have a big problem on our hands to solve.

However, he declared that the sensitization would be taken to all Local Government Areas, as they seek to find a solution to the menace.

According to Mrakpor, “We used to think it was only Edo State that was affected by trafficking until NAPTIP came to us saying that we have they same problem” In the same vein, Commander of the National Agency for the Prohibition of Trafficking in Persons (NAPTIP) Benin Zonal Command, Mr Nduka Nwawenne appreciated the initiative of the State government by setting up a task force to fight illicit vices, as Delta is endemic to trafficking.

He then emphasized that the war against trafficking must be won in order to protect the good image of the state.

Also, Commissioner of Women Affairs and Community Social Development, Hon Florence Alanta stated that the fight against trafficking is a fight for the future of Delta and Nigeria. She implored parents to desist from domestic violence and comparison, as such actions unknowingly compels their wards to such illicit acts.

While narrating his sad experience one of the Libya returnees called Obiaze Hilary, an indigene of Delta, said that illegal migration is not an advisable means to travel.

He then urged individuals with such a mindset to desist from such, saying that, it ends in hardship and death.