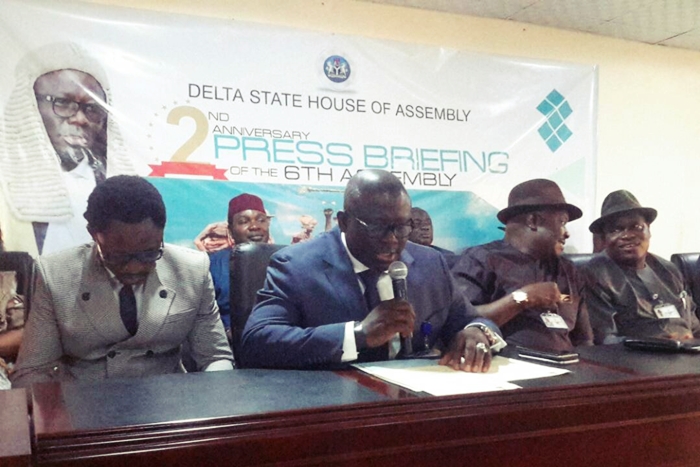 Speaker of the Delta State House of Assembly, Rt. Hon. Sheriff Oborevwori has said that the Sixth Assembly of the State is determined more than ever to improve on its performances as it enters the Third Legislative year.

Oborevwori who made this declaration on Thursday, June 7, 2017 during a press briefing to mark the Second anniversary of the Sixth Assembly said, “In the next parliamentary years, the House will ensure that it retains its focus. It will engage in deliberations and matters that would improve the fortune of Deltans.”

The speaker stated that as members of the Sixth Assembly, they will continue to keep faith with their core duty of law making which is aimed at promoting order and good governance in Delta State.

“We are aware that Deltans are looking forward to the delivery of more dividends of democracy, and it is in our place to make that happen. Despite the harsh economic situation which has affected service delivery, the House remains committed to providing effective representation to our constituencies. We cannot afford to fail our people. We will continue to do that which is expected of us as lawmakers.”

Highlighting the achievements of the House within its Second legislative year, Speaker Sheriff noted that the House received a total of 34 Bills with 12 of the Bills already assented to and 6 awaiting the Governor’s assent.

He said; “I wish to place on record that the Sixth assembly has performed credibly well by all standards. The house received a total of Thirty-Four (34) bills, of which, Ten (10) were Executive and twenty-Four (24) were Private Member Bills. A total of Twelve (12) Bills have been assented to while Six (6) Bills are awaiting assent; and Seventeen (17) Bills are at committee stage.”

On his emergence as the speaker, Rt. Hon Sheriff Oborevwori said despite the May 11, 2017 unavoidable change in the Leadership of the House, Deltans should be rest assured that Members are united more than ever to take the task ahead.

He commended Governor Ifeanyi Okowa for his support to the Sixth Assembly thanking him for inspiring the co-operative spirit existing between various arms of Government in Delta State.

Oborevwori promised on behalf of the Delta State House of Assembly to reciprocate the benevolent attitude of the Executive arm by giving prompt attention to passage of bills. “I promise that the Legislature would continue to maintain a cordial working relationship with the Executive arm of Government.”

The Impeached Speaker, Rt. Hon. Monday Igbuya was however, visibly absent from the Anniversary celebration.