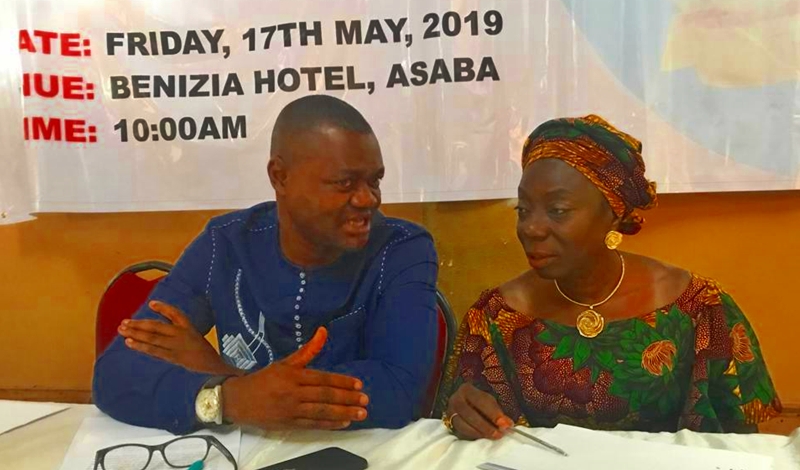 The Delta State Government has proposed to construct an Industrial Gas Park in Kwale, Ndokwa West, and  a Modular Refinery in Sapele, Sapele local government areas as part of efforts to harness the the huge oil and gas potentials in the State.

The State Commissioner, Ministry of Oil and Gas, Mr Freeman Fregene disclosed this during a Consultative Stakeholders Forum of Oil and Gas Host Communities for Delta North Senatorial District of the state in Asaba, the state capital.

The Oil and Gas Commissioner, Mr Freeman Fregene said Delta State had Forty percent out of the nation’s One Hundred and Ninety Two Trillion standard cubic feet of gas deposits hence the need to properly harness the state’s huge potentials in the sector.

Delta State Commissioner, Ministry of Oil and Gas, Mr Freeman Fregene and the Permanent Secretary in the Ministry, Mrs Nkem Ajufo flanked by Attendees of the Consultative Stakeholders Forum of Oil and Gas Host Communities for Delta North Senatorial District in Asaba.

Flanked by the Permanent Secretary in the ministry, Mrs Nkem Ajufo, Mr Fregene noted that the proposed Industrial Gas Park and Modular Refinery when completed would improve the socio economic well being of the people of Delta State.

Mr Fregene said the consultative stakeholders forum with the theme “Curbing Youth Restiveness and Criminalities in the Oil and Gas Sector for Sustainable Development in Delta State” was organised to identify the causes of youth restiveness and other criminalities and proffer solutions that will create enabling environment for sustainable development.

He noted that the forum will enlighten host communities on the need to create a peaceful environment for international oil companies to operate and also articulate the role of oil and gas companies in ensuring they meet with their corporate social responsibility to host communities.

The Oil and Gas Commissioner said the state government under the leadership of Governor Ifeanyi Okowa was desirous of sustainable peace through dialogue  in order to sustain growth and development of communities.

Mr Fregene noted that within the last two years the state had witnessed a steady increase in crude oil production as a result of the relative peace in the Niger Delta region and urged youths to shun vandalism, illegal  bunkering as well as rancor, excessive and unnecessary monetary demands from oil companies.

The Oil and Gas Commissioner said the state governor has signed the bill prohibiting multiple levies demanded by indigenes from investors and developers as such discourages infrastructural development and stressed the need for synergy among stakeholders.

While emphasizing the need for host communities to ensure the inputs of the state government when signing memorandum of understanding with oil companies, Mr Fregene disclosed that the Ministries of Oil and Gas as well as Justice have been mandated to always interface with oil companies in tackling issues that could threaten amicable relationship noting that agitations could be settled through dialogue.

In a lecture on the theme of the consultative forum, a senior lecturer in the Department of Political Science, Delta State University, Abraka, Dr Princewill Okereka said there was need for regular interaction between host communities, oil companies and the state government which are the critical stakeholders in the oil and has sector.

He said agitations in host communities arise as a result of neglect in the provision of basic amenities by oil companies stressing that with out peace there can be no sustainable development.

Dr Okereka opined that the Ministry of Oil and Gas was created to interface between oil companies and Host Communities and advised community leaders to sensitise youths to redirect their energies into productive ventures.

He commended Governor Ifeanyi Okowa for his efforts in road infrastructure and rehabilitation of technical colleges as well as scholarship to students at various levels.

Stakeholders from selected oil and gas communities in Delta North commended the Ministry for the initiative of organising a stakeholders consultative forum and urged oil companies to implement memorandum of understanding in order to ensure peace in host communities.

They appealed to the Ministry to protect host communities from unfriendly policies of oil companies, employ their indigenes and be more open in dealing with communities rather individuals.