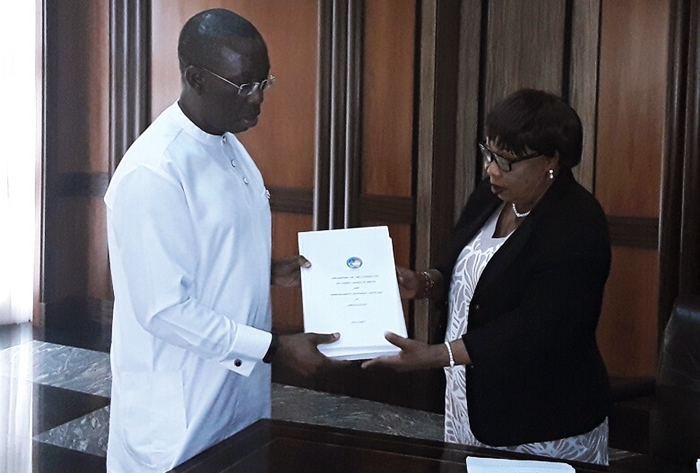 Governor Ifeanyi Okowa has said that the sum of 12.319 billion naira would be recovered from public servants who fraudulently falsified their records of service.

The governor also directed that the over 530 staff who falsify their retirement age or refused to appear before the Verification Committee On Age Discrepancy And Date Of Birth and Employment of Public Officers in Delta State should be expunged from the payroll immediately.

Receiving the Final Report from the Committee which had Chief Nkem Okwuofu as Chairman, on Monday, August 7, 2017 in Asaba, Governor Okowa decried falsification of documents and laxity in the part of those who aid and abet such actions in the public service.

He bemoaned the connivance of staff in the falsification and handling of records especially those that are dead and retired, directing the office of the Head of Service to take disciplinary action against the Heads and Directors of affected Ministries, Departments and Agencies.

“It is quite unfortunate that at this point in time we are still dealing with this situation in our public service where people can still voluntarily work with other people to change their date of birth and date of appointment and it is something that all of us must frown at; I frown at such and I believe that the public service and its management must continuously frown at such an act because it is not possible for any staff to unilaterally change his or her date  of  birth or appointment, so obviously there is a collusion in the entire system and it worries me that at this point in time this is still ongoing”, he said.

“Head of Service, with effect from today, the 402 absentees have to be disengaged from the payroll completely and the people that are due to retire, must be expunged from the payroll between today and tomorrow, we cannot continue to tolerate this, it is very unfortunate that we continue to see people who are dead and are still receiving salaries, it is very unsettling and I do not know what the reporting system is; when someone is dead he/she is dead and the name must be removed immediately”, Okowa said

“I think that there is a lot of laxity in the entire system and we must find a way to improve on the workability of the system and people must be held liable and disciplined if they do not do their duties; the permanent secretaries,the directors are there, so henceforth any place we find such laxity the people at the head including the permanent secretary or the director must be disciplined themselves otherwise such acts will continue and it should not be because it is very embarrassing to see people that have died over three years ago and we are still paying them”, he added.

The governor commended the Committee for the exercise and assured them that government would implement their recommendations for the betterment of the civil service.

Earlier, while presenting the report, Chief Okwuofu disclosed that a total of 4,742 persons were screened, out of which 1,695 were cleared, 137 were asked to proceed on retirement, 810 had their dates of birth and employment corrected and 2,085 verified and affirmed while 402 were absent.

She disclosed with the correction of dates of birth of some staff in the payroll who ought to have retired but, for the falsification of records and others whose dates of birth were altered though not within retirement age, the exercise has resulted in total financial gains of 12,319,762,921.20 naira for the state government.