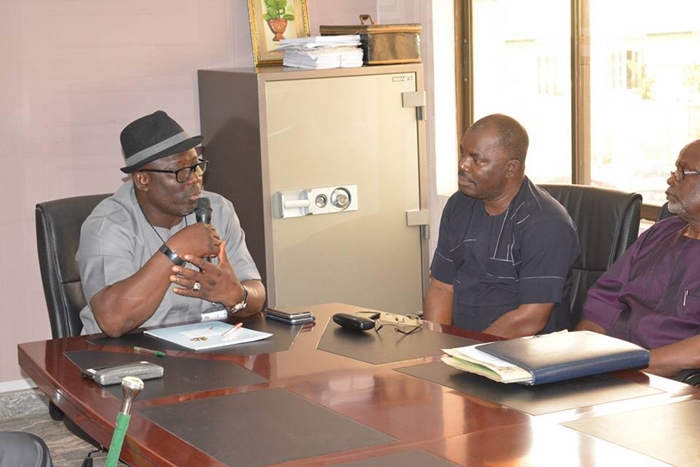 Presenting members of his delegation to the Speaker and Principal members of the Delta State House of Assembly, Dr. Oweh said that they are in Delta State as apart of their routine duties to State Assembly Service Commissions which falls among the States they represent in the Commission.

“This kind of visit provides synergy and forum for the symbiotic relationship needed to grow and nurture the legislative service which is young when compared with the Civil and Judicial Services. By this visit, the commission will be able to provide the legislators a knowledgeable and skillful workforce for the legislature, whose functions are dynamic and has global implications.”

In their request, the delegation sought for the amendment of section 13(1) of the law establishing the Delta State House of Assembly Service Commission to conform with the National and other State Houses of Assembly Service Commissions in other to particularly domicile the appointment of the Clerk and Deputy Clerk and other Statutory functions in the State commission’s purview.

“We fully support the principle that all public services questions including appointments, promotions, transfers, postings, dismissals and other disciplinary matters should be kept completely free and independent of political control. This amendment will not only ensure loyalty to the Service and secure the office of the Clerk and Deputy Clerk but also insulate the service from politics and political interference.”

“I believe that your coming will bring progress and stability to this commission. We will try as much as possible to give the commission our support. I want to assure you that there is a good working relationship between the legislature and the commission and it is a cordial relationship. We will continue to work together to see that the commission succeeds.”

Speaking on the tenure elongation request for members of the State Service Commission from Four (4) years to Five (5) years, Speaker oborevwori said, “it is what members will look at. We were elected here to make laws that will impact on our people and those are part of our responsibilities and I assure you that when the time comes and we know that it is achievable, we will do it.”

Asaba Township Stadium to be Completed in the Next few Months – Okowa
Anthony Elekeokwuri Mourns the Death of Sir Fortune Ebie, Commiserates with Ika Nation
Advertisement