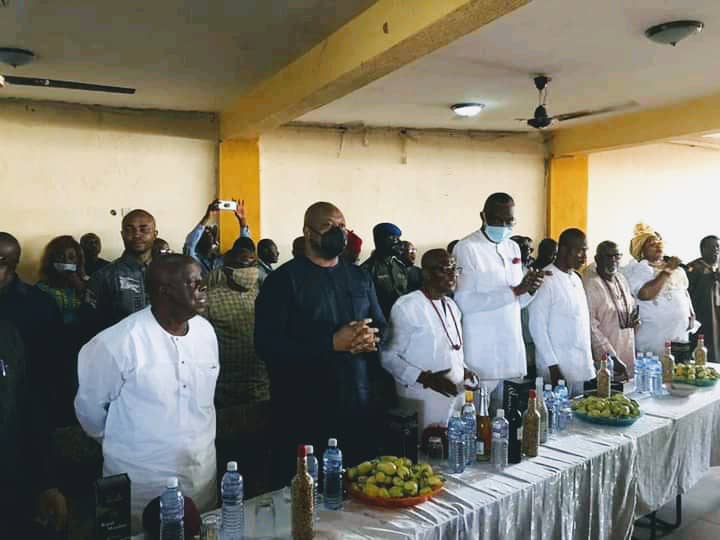 Delta North Senatorial District of the All Progressives Congress (APC), has unanimously passed a Vote of Confidence on President Muhammadu Buhari for his mature and adroit handling of the affairs of the country and therefore called on Nigerians, irrespective of party affiliation, to shun inflammatory statements so as to give the President, the needed support to lead the country to peace and prosperity.

Rising from a crucial meeting of it’s Leaders and Critical Stakeholders, held at Agbor, Ika South LGA, on Saturday, June 12, 2021, the Delta North APC, in an eight point communique drafted by a four man committee comprising; Barrister Cyprain Ashibuogwu, Nwaham Wemdi, Nkem Osu and Victor Oziegbe, which was read by Comrade Chidi Okonji the state Secretary of the APC, expressed implicit confidence in the tireless efforts of the Alhaji Mai Mala Buni led National Caretaker Committee, to reposition the APC, ahead of the forthcoming 2023 general elections.

The Delta North APC leaders and stakeholders equally hailed the Chief John Odigie-Oyegun’s South South Peace Building and Reconciliation Committee for setting up a 4-man College of Leaders in each senatorial district of Delta state to oversee affairs of the party in the respective districts.

Also, the party in the district strongly appealed to the other sister districts in the State, to concede the APC Delta State Chairmanship to Delta North Senatorial zone.

In his address, the Senatorial chairman, Chief George Okafor admonished party faithful in the district, to eschew primordial sentiments and always put the interest of the party on the front burner as it will engender unity which is an imperative factor in preparing the party for success as the 2023 election is imminent.

Also speaking at the event, Chief (Dr) Cairo Ojougboh harped on the need for all to imbibe and exhibit un-alloyed loyalty and faithfulness to the party.

“I am convinced that with your loyalty and faithfulness, the party (APC) in Delta North and of course the state, will harvest electoral victories in future elections,” he said.

Similarly, another front row APC stalwart of Delta North extraction, and former speaker of the fifth Delta state house of assembly, Rt Hon Victor Ochei, enjoined the group to always support progressive ideas aimed at enhancing the electoral fortunes of the party within the Delta North senatorial district in particular and Delta State in general.

He stated that, ”the impressive attendance recorded at the meeting underscores the fact that Delta North has never and cannot be an appendage to our sister districts and as such, it is imperative to unite and portray our district as one that can excel” .

Ochei posited that the forthcoming congresses require unity of purpose, adding that “nobody from any other district will determine the results of the exercise”.