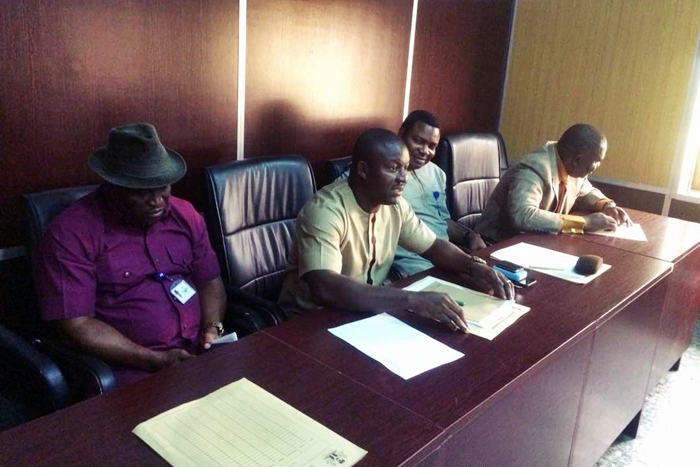 The House Committee on Commerce and Industry in the Delta State House of Assembly (DTHA), has implored the Honourable Commissioner for Commerce and Industry, Barr. Mrs. Mary Iyasere to develop and float new ideas on how to promote the viable commercial resources of State to Local and International Investors.

The Committee chaired by the member representing Ika South State Constituency, Hon Festus Okoh with Hon Oboro Preyo, Hon Anthony Elekeokwuri and Hon Daniel Mayuku as members, pressed the Commerce commissioner on this need during a meeting of the House Committee and officials of the Ministry of Commerce and Industry on Wednesday October 25, 2017.

They urged the Commerce Boss to partner construction companies and heavy steel consumers in the State on the need to partronize the near moribund Bendel Steel Structure Limited in Warri to promote the usage of local contents which will in a long run revive the economic anatomy of the industry.

While assuring the Commissioner of a robust partnership, the committee members further tasked the commissioner to site commercial establishments like markets in viable locations across the state as it will lead to even development and boost the Internally Generated Revenue (IGR) of the State.

Briefing the Committee on the activities of the Ministry since her appointment as Commissioner, Barr. Iyasere stated that within the time under review, the State Government through her Ministry has embarked on the construction/development of three modern/ central markets across the three zones of the State.

On the establishment of Modern/central Markets, the Commissioner said; “Although the development of Markets is the statutory responsibility of the Local Government Councils, intervention in this area by the State Government became necessary due to the limited funds at the disposal of local government councils for capital projects that requires huge capital outlay.”

She stated that the two central Markets at the Governor’s hometown Owa-Alero and in Bomadi, are still under construction while the modern market at Orerokpe has just been commissioned for use.

She listed other achievements to include; the formation of 3,643 cooperative societies in the State, the establishments of four (4) Fish Feed Mill Factories in Asaba, Owanta-Aliosimi, Ekpan and Ubeji-Ugbokodo through Public Private Partnership (PPP) arrangement noting that two of the Mills are already nearing completion.

Speaking further, Iyasere disclosed that FAZSAD construction company based in Rivers State, has been given the nod to develop the Permanent Trade Fair Complex at Osubi; an arrangement with the State Government through the Commerce Ministry for N2 billion.