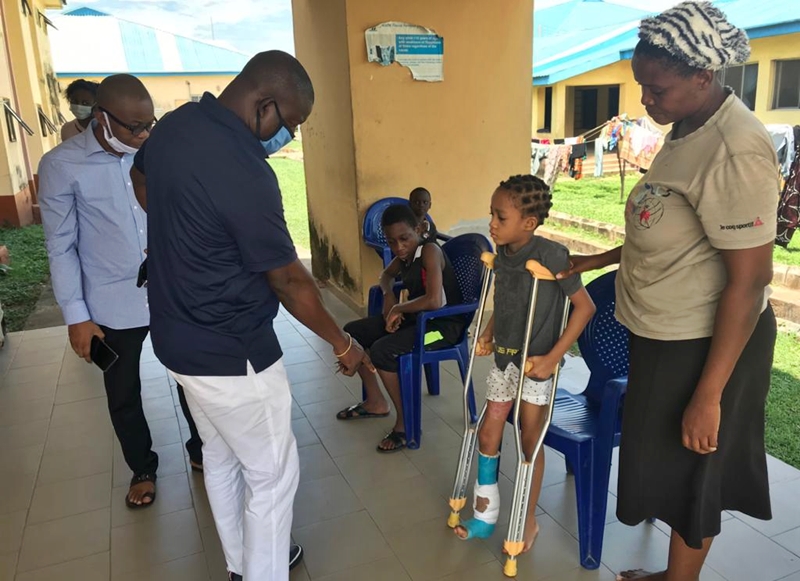 Life line today came the way of little Miss Glory Roland who has been at the children ward of the Federal Medical Center, FMC, Asaba for the inability of her parents to settle the medical bill incurred in the course of her treatment from a ghastly Motorcycle accident .

The Member Representing Ika South in the Delta State House of Assembly, Hon Festus Okoh, who was inadvertently involved in the matter, cleared off the three hundred and fifty thousands naira bill that freed the six year old girl from the hold of the hospital management.

Little Miss Roland was a victim of hit and run motorcycle accident on her way back from school on the 29th of January 2020.

Her mother, Mrs Evelyn Roland said Glory is a Primary one pupil of Owa Model Primary School and that on that faithful day, Glory’s father was indisposed to pick her from school after the close of the day.

She said Glory and some others decided to trek home from school to Idumuesah community where they reside when she was hit by the run away motorcycle rider.

Mrs Roland explained that Glory was rushed to Central Hospital Agbor where they were referred to the FMC Asaba and the hospital has since 14th of April discharged them but could not raise the money charged for the treatment.

She said although Glory’s father is from Edo state, she is from Idumuesah in Ika North East government area where they reside and involved in peasant farming.

Hon Festus Okoh said a lady called her that one of his constituents from Ika South Constituency was being held at the FMC Asaba for not being able to settle the bill incurred in her treatment from accident.

Hon Okoh stated that the lady sent him the picture where he found out that the said constituent was a little girl of about six to seven years.

The Lawmaker noted that as his nature he immediately drove to the children ward of the FMC Asaba only to find out that the patient is not from his constituency but Ika North East.

Hon Okoh said despite that he paid the bill to free the little girl and her mother, stressing that it was his nature to always assist the needy without expecting anything from them.

Hon Festus Okoh who is the Majority Whip of the Delta State House of Assembly expressed gratitude to God for providing him the wherewithal to assist those in need.