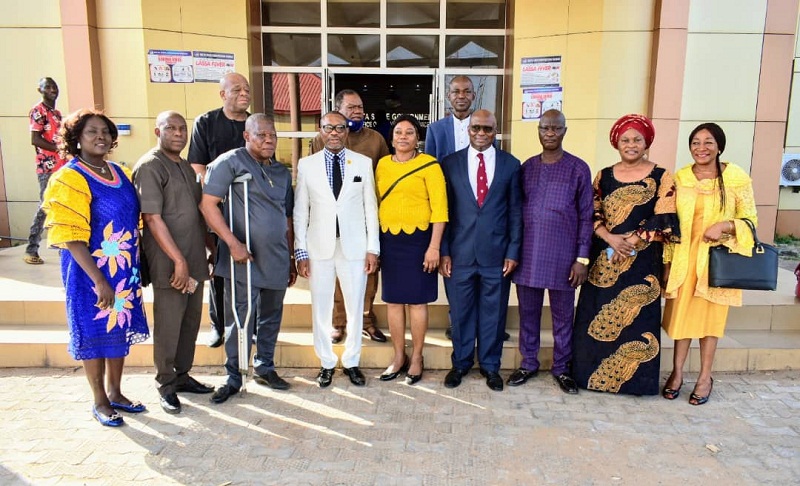 Delta State Head of Service, Mr. Reginald Bayoko has charged civil servants in the State to be professional, clean and be fully dedicated to the delivery of the agenda of government for the benefit of the people.

Mr. Bayoko stated this on Monday, November 16, 2020 when 10 retired Permanent Secretaries who recently disengaged from the State Public Service after attaining the compulsory retirement age paid him a valedictory visit.

The Head of Service while paying glowing tributes to the retired Permanent Secretaries for their various contributions towards building a strong and vibrant civil service, thanked the retired bureaucrats for their meritorious service to the State.

Mr. Bayoko who described the Civil Service as the engine room of any government sued for the cooperation of civil servants in maintaining and promoting the core values the service is known for.

He reiterated the state government commitments in the training and retraining of its workforce as part of efforts in building a healthy service that should be a reservoir of capacity and wealth of knowledge whose personnel can favorably compete with their counterparts anywhere in the world.

While affirming that he is an incurable optimist, the Head of Service assured public servants in the state of according them their rights and privileges and urged them to continue to reciprocate government gesture.

Bayoko, who expressed deep regret over the death of Engineer Donatus Umukoro, a retired Permanent Secretary from the State Ministry of Works as well as the death Mrs. Iyabo Morka, wife of Jerome Morka, a retired permanent secretary from the Office of the SSG, prayed God to grant their souls eternal rest.

Earlier, the Chairman of Welfare, College of Permanent Secretaries, Mr. Jerry Agbaike in his welcome remarks disclosed that the valedictory visit by the retired PS’s was an age long transitory process of bowing out of the service.

The retired Permanent Secretaries which include Mr. Jerome Morka, Mr. Ebipade Aloba, Mr. Joseph Uwalogho, Mrs Felicia Aghwadoma, Dr. Mrs. Alero Tonwe, Mr. Daniel Momah and Mrs. Ngozi Bamah, while sharing their respective experiences during their years of service, thanked the Delta State Government for the opportunity given to them to serve the state as Permanent Secretaries even as they advised civil servants to imbibe the virtue of hard work, discipline, and respect in the discharge of their duties.