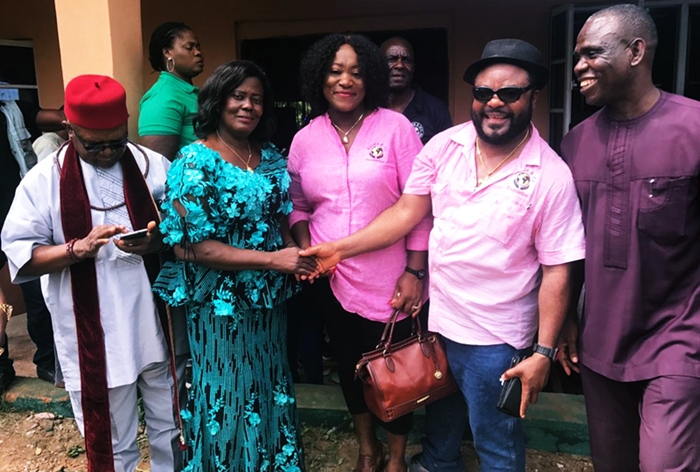 The Azuka and Ify Foundation in collaboration with the Igbodo Development Union, IDU, Worldwide, have donated science equipment and other educational materials to Comprehensive High School and all the public primary schools in Igbodo, Ika North East local government area.

The donated items were received on behalf of the Delta State Government by the Permanent Secretary, Ministry of Basic and Secondary Education, Mr Samuel Dieteke from the Head of the Foundation, Dr Azuka Ubani, flanked by his wife, Ify, children and the President-General of IDU Worldwide, Deacon Matthew Okwaje among others.

While Comprehensive High School received the science equipment to further enhance teaching and learning of science related subjects in the school, pupils of the five public primary schools, namely Ozei, Ikpeku, Orie, Ilabor and Mbulu Primary Schools in Igbodo were given the educational items which include, school bags, books and other writing and drawing materials.

The Permanent Secretary, Mr Samuel Dieteke who immediately handed over the Science Equipment to the Principal of Comprehensive High School, Igbodo as well as flagged off the distribution of other items to pupils of the public primary schools, commended the Azuka and Ify foundation and the Igbodo development union for the educational support program.

Represented by the Director, Science, Vocational and Technical Education in the ministry, Mrs Kehinde Oderhohwo, the Permanent Secretary restated the commitment of the Delta State Government to grow the education sector and stressed the need for well meaning organizations and individuals to contribute to the development as government can not do it alone.

He warned against any form of theft or vandalism of the donated equipment, urging the school management and Igbodo community to protect it.

The traditional ruler of Igbodo kingdom, Obi Ikechukwu Osedume 1, represented by the Iyase of the kingdom, Dr Ifeanyi Unomah, paid glowing tributes to sons and daughters of the community, the Delta State Government and agencies that had been partnering with Igbodo Development Union, in growing all the relevant sectors in the community.

He stressed the need for standards in teaching and learning in public schools in the community and commended the Azuka and Ify foundation for coming the second time to Comprehensive High School Igbodo to donate science equipment to the institution after a similar gesture in 2016.

The Chief Executive Officer of Azuka and Ify Foundation, Dr Azuka Ubani, an old student of Comprehensive High School, Igbodo recalled with nostalgia when he was a student in the institution over thirty years ago, stressing that the school was key to his development in life.

Dr Ubani, a US based indigene of Igbodo promised to never stop giving back to the environment that made him and commended the President General of IDU Worldwide, Deacon Matthew Okwaje for constantly and consistently reaching out to well meaning sons and daughters of Igbodo across the globe to be parts of changing the narratives about the community from negative to positive.

The elated President General, IDU Worldwide, Deacon Matthew Okwaje said the donation of the Science equipment to Comprehensive High School and other educational materials to public primary institutions in Igbodo by the Azuka and Ify foundation was another milestone in the drive by IDU for sustained partnership with government and donor agencies in the development of the once neglected Igbodo community.

Deacon Okwaje said the Science Equipment is to enhance effective teaching and learning of science subjects in the college, while the school bags, books and others distributed among pupils of the five public primary schools would assist in alleviating challenges faced in their educational pursuits by their parents.

The Chief Inspector of Education, CIE, Ika North East, Dr John Ojogho, the Principal of Comprehensive High School, Igbodo, Mr Martins Odiase and the Head Boy of the school, Master Victor Adoh, commended the commitment of the Igbodo community towards infrastructural and academic development in the school and urged the people to sustain it.

The high point of the ceremony which was attended by the wife of the Obi of Igbodo, HRM Queen Onyiyechukwu Osedume amongst others, was the formal handing over of the Science Equipment to the state government by the Foundation as well as distribution of the other educational materials.

Some parents of the recipients prayed for more blessings for the donors of the educational materials, promising to make judicious use of the donated items.