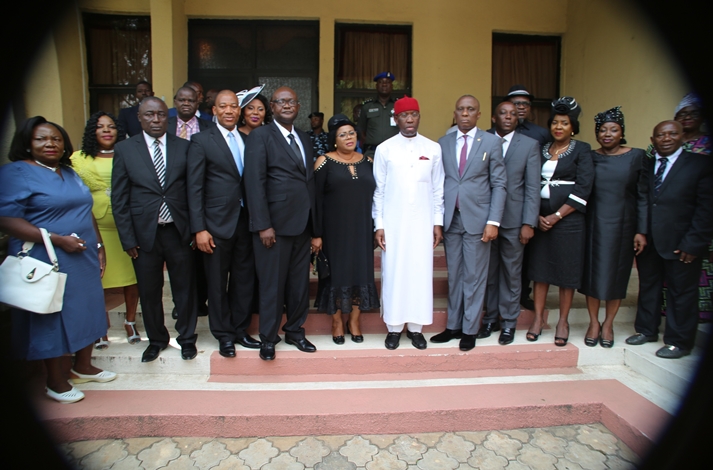 According to the Governor, “one of the things you (Judges) must guard against is the frivolous use of injunctions and the frequent adjournments of cases, which not only leads to delay and congested courts but has also contributed to negative perception of the Judiciary in the court of public opinion.”

Okowa who submits that such bottlenecks are inimical to the development of the judicial system said “Judges have an obligation to see to it that justice is not only served but,  also seen to be served, so that the Judiciary does not lose the confidence of the public from which it ultimately derives its authority,”.

Governor Okowa emphasised that “as Judges, fairness, equity and justice must be your watchword at all times, you must maintain a high level of focus, discipline and personal probity.”

While congratulating the Judges for their appointments, the Governor asserted, “as you begin your journey as privileged members of the Bench, I expect you to continue in the same spirit of hard work, excellence and forthrightness that earned you this appointment, this is not the time for you to rest on your oars, your job as judges will further challenge your intellect, demand greater resourcefulness, task your creativity, stretch your patience, encroach on your time and test your value system.”

The Governor disclosed that the 5 Judges were “screened, selected and appointed in line with laid down procedures for such appointments as enshrined in Section 271, sub section (2) of the 1999 constitution of the Federal Republic of Nigeria (as amended) and by virtue of this constitutional provision, a judge shall be appointed by the Governor of a state on the recommendation of the National Judicial Council; the NJC considered and deliberated on the nominations and, in their wisdom, considered and approved the persons sworn-in as Judges.”

Mrs Celestina Dafe-Idise who responded on behalf of other Judges, thanked God and those who made it possible for them to emerge as Judges assuring that they will carry out their duties without fear or favour but, in accordance with the constitution and laws of the country.