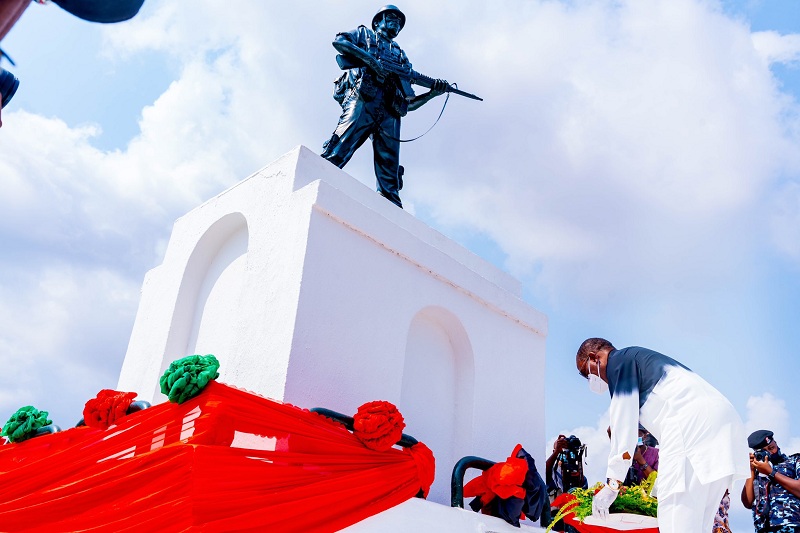 The chairman of the Nigeria Legion, Delta State, Col. Boniface Ojei(rtd) made the call today in an interview with journalists at the 2021 Armed Forces Remembrance Day celebration held a the Cenotaph, Asaba.

Also lending their voices, the member representing Ika North East constituency in the State House of Assembly, Hon. Emeke Elekeokwuri and the State Attorney General and Commissioner for Justice, Mr. Peter Mrakpor (SAN) said ” the support of all for the families of the departed heroes, would boost the morale of serving military officers to give their best in defence of the territorial integrity of the nation”.

The ceremony which is an annual celebration to honour fallen heroes who died in the defence of the nation was attended by the state governor, Senator Ifeanyi Okowa, his Deputy, Deacon Kingsley Otuaro, the Deputy Speaker of the State House of Assembly, Hon. Ochor Christopher Ochor, who represented the Speaker of the Assembly, Rt. Hon. Sheriff Oborevwori ,and the Chief Judge of the state, Justice Marshall Umukoro who took their turns to lay wreath at the foot of the unknown soldiers.

Other dignitaries at the ceremony included Service Chiefs and heads of paramilitary organisations in the state as well as members of Delta State Traditional Rulers Council led by the Chairman of the Council, HRM Obi Emmanuel Efeizomor II and representatives of both Christian and Islamic faiths in the state.

The ceremony featured symbolic gun shots by selected military personnel in honour of the fallen heroes as well as the release of pigeons by Governor Ifeanyi Okowa, his Deputy, Barr. Kingsley Otuaro and other dignitaries at the ceremony to signify peace.