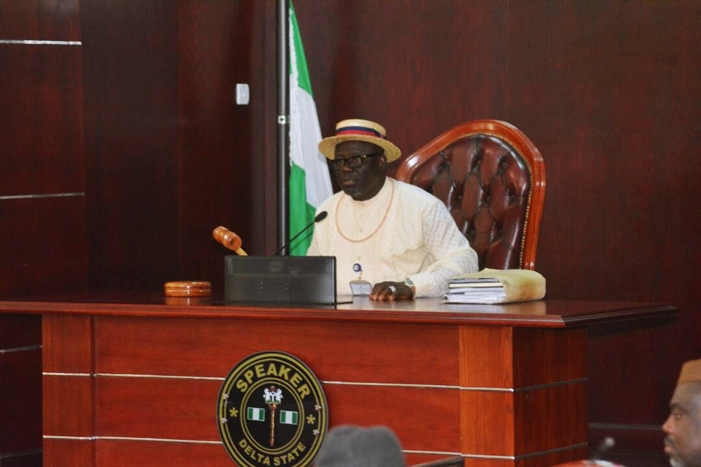 The Delta State House of Assembly has adopted the State Government’s Fiscal Strategy Paper (FSP) for year 2019 to 20121 sent to it by Governor Ifeanyi Okowa for consideration as to facilitate the preparation of the 2019 budget for the State.

The FSP consideration which was committed to the House committee on Finance and Appropriation on September 6, 2018, submitted its report at Tuesday, October 9, 2018 plenary and was subsequently approved by the House.

Delivering the Finance and Appriopriation committee report on the FSP, the member representing Aniocha North Constituency, Hon. Emeka Nwaobi who stood in for the chairman of the committee and member representing Ethiope West constituency, Hon. Erhiatake Ibori-Suenu, informed the House that 2019 to 2021 FSP was in consonance with international best practices certified for approval by the House.

While presenting the report, Nwaobi said the Delta State Fiscal Strategy Paper (FSP) 2019 to 2021 was sent to the house through a letter from the governor, Dr. Ifeanyi Okowa and was read at the floor of the house by the Speaker on Wednesday 26th September, 2018. It was thereafter committed to the committee with a mandated to consider the paper and report back to the house on Tuesday 9th October, 2018.

Nwaobi said the committee critically examined and analysed the content of the paper and observed that the FSP was prepared in compliance with Fiscal Responsibility Law with a view to ensuring appropriate financial management and allocation of resources in accordance with international best practices.

He added that the committee observed that the State’s Economic and Fiscal Update (EFU), Fiscal Framework and Policy thrust of government upon the state budget of 2019 budget shall be prepared.

Nwaobi further noted that the committee further took a critical examination of the macroeconomic framework applied, the projections made and computations contained in the paper and concluded that it was harmless.

The committee however recommended that the approval sought be granted by the house to enable the government adopt the paper as a framework for the preparation of the 2019 budget as the report was laid before the mace.

The Majority Leader of the House, Hon. Tim Owhefere thereafter moved for the receipt and adoption of the report and was seconded by member representing Ika South, Hon. Festus Okoh.