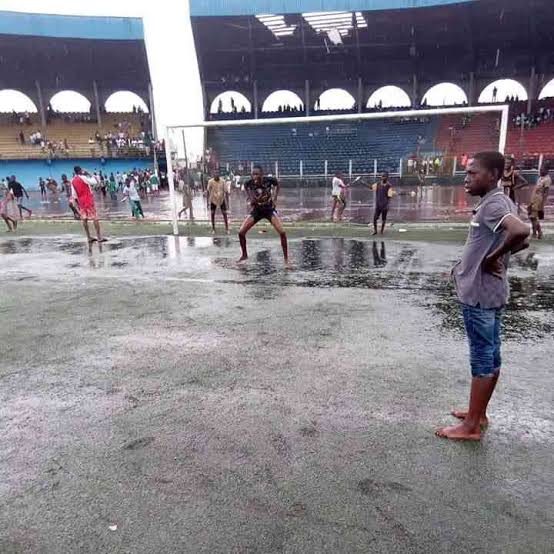 APC in a press statement commending the initiative of a church to renovate the sporting arena, decried the family venture administration approach by Governor Okowa which resulted to the dilapidation of such vital facility.

According to release as obtaIned by this medium, “The All Progressives Congress, APC, Delta State, would like to commend Pastors Korede and Esther Komaya of the Master’s Place International Church, Effurun, for the church’s renovation of the Warri Township Stadium.

“Our party notes the impressive work the church has embarked upon at the long abandoned stadium in the heart of the Oil City, even as we applaud the Body of Christ for stepping in where the deceitful administration of Governor Ifeanyi Okowa has woefully failed.

“It is instructive that in furtherance of his clannish and family-centric approach to governance, Governor Okowa had foisted his younger brother, Mr. Tony Okowa, on Delta State to preside over the entire sports infrastructure of the state, even though the young man has neither passion for nor, expertise in sports and, had hitherto never been known as someone who excelled in sports administration, anywhere or at anytime.

“Indeed, the highpoint of the younger Okowa’s career in sports administration was attained when he was alleged to have given the then Secretary to The State Government, SSG, Delta State, Chief Ovie Festus Agas, a very dirty slap on the face for not hurriedly signing over huge sums of our state’s money to him for the highly bloated and over-invoiced construction of the Asaba Township Stadium, where a newly erected water tank suddenly collapsed and almost killed scores of people under his stewardship!

“While much appreciating this particular denomination as well as the greater Body of Christ for its intervention in infrastructural development in the state, we cannot help but note that this is clearly a case of the church stepping in to fill a wide void, huge lacuna and gaping hole in governance on the part of the People’s Democratic Party, PDP-led Okowa administration. We find it particularly sad that a Governor who is always first to arrive in church, has completely abandoned governance in favour of an extremely dangerous brand of politicking which now threatens unity, peace and cohesion in Delta State.

“Indeed, it is most disheartening for a Governor that is a prime beneficiary and product of equity to abandon his duties and proceed on spreading division and acrimony across the state in a desperate bid to cling to power even after his tenure ends. We are nevertheless comforted by the caution of Our Lord and Saviour, Jesus Christ, when in Mathew 7:21, He said “Not everyone who calls out to me, ‘Lord! Lord!’ will enter the Kingdom of Heaven. Only those who actually do the will of my father in Heaven will enter”.

“We thank the church for doing the will of God and pray for the success of its upcoming crusade in the Oil City. We beseech God for showers of blessings upon our state even as our citizens continue to feel the brunt of an excruciating absence of governance on the part of Okowa’s lame duck administration. We assure the good people of Delta State that, as God lives, their liberation is nigh even as they cannot wait for the ignoble exit of the monumental mistake that will go down in political infamy as the Okowa administration.” The statement read.