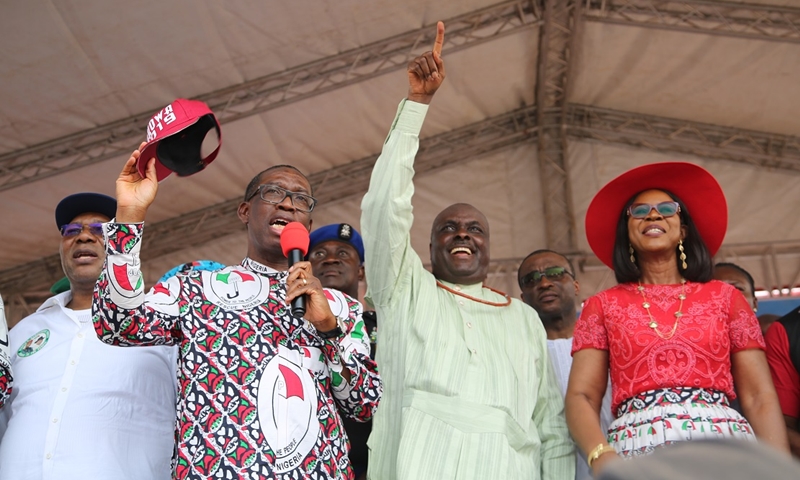 Former Governor of Delta State, Chief James Ibori has warned against crisis during the 2019 general elections, expressing confidence that Governor Ifeanyi Okowa will lead all the candidates of the Peoples Democratic Party (PDP) to victory.

Chief Ibori gave the warning Friday, January 4, 2019 at the flag off of campaign of the Peoples Democratic Party (PDP) at Oghara, Ethiope West local government area of Delta State.

According to Chief Ibori, “please, in the name of God, don’t come to Delta State to cause trouble; this is democracy, you tell the people what you will do, sell your programmes to the people.”

“Anybody that is planning anything that is bad for our state, God will not allow it,” the former Governor asserted.

He continued amidst thunderous applause from members of the PDP who literarilly took over all available space in the Oghara Township Stadium, “the re-election of Governor Okowa is our challenge; I have no question in my mind that you (Governor Okowa) has done very well, I can say that without equivocation, you have done exceedingly well.”

Chief Ibori stated that Governor Okowa is “competent, capable, knowledgeable and have the capacity to govern the state for another four years; you (Governor Okowa) deserve another term, I am indeed very pleased with you, your achievements.”

“In your first tenure, you launched your campaign in Oghara and today, you are here to launch your campaign, it means you know your history and as the head of this political family, I declare and decree that you have all it takes to lead this battle, for all the candidates of our party to win in the election, God will continue to guide you, you have humbled yourself, God will uplift you,” Chief Ibori added.

The former Governor noted that the peace of the state was very paramount and as such, the Governor Okowa should be allowed to complete second term in office in line with rotation of power that exists in the state.

He said, “we should allow the Anioma people to complete two terms, it is the turn of the Anioma people, don’t let them to deceive you, as you go into the field, be peaceful, we are peaceful people, sell your programmes to the people.”