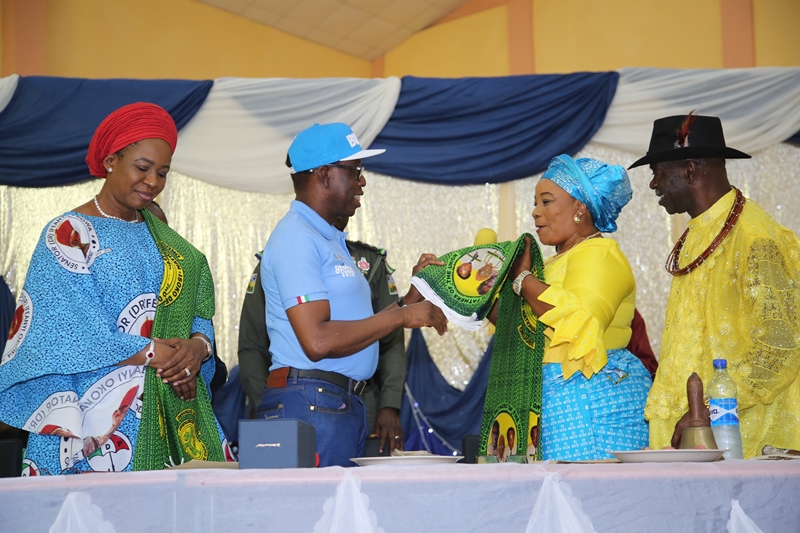 In a rare show of love and solidarity, all the traditional rulers of Isoko ethnic nationalities and their President-Generals have endorsed Governor Ifeanyi Okowa as their candidate for the 2019 governorship elections.

At an emergency national conference of Isoko nation convened by the Isoko Development Union (IDU) held at Oleh, Isoko South local government area of Delta State, the traditional rulers observed that the only way they could reciprocate Governor Okowa’s good governance in Isoko land is to re-elect him to continue with his good works.

The Ovie of Oleh Kingdom, Omagha I, HRM Anthony Ovrawah, who is the Chairman of Isoko Traditional Council of Traditional Rulers led more than 19 traditional rulers to pray for the governor, assuring that all Isoko sons and daughters will cast their votes for him.

Earlier, the President-General of Iyede Kingdom, Chief Jerry Okokowa moved the motion for Isoko people to collectively, cast their votes for the return of Governor Okowa to Government House, Asaba till 2023, stating, “we have no other option than Governor Okowa, he has executed a lot of projects in Isoko land including the construction of this edifice, the Isoko house and he will do more for us in the next four years.”

Governor Okowa, filled with emotions, thanked the Isoko people for the love they have shown to him and his administration, stating, “I am surprised, I am excited at what you have done this afternoon; It is a great honour that you have done to me and I must thank the Isoko people for the love you have for me and my administration; what is happening here today, convinces me that you have accepted me as one of you; it tells a lot of story that you are not ashamed to identify with me; I thank you for the peace you have continued to give to us as a government which has given us the enabling environment to carry out development projects.”

“Thank you for the partnership which will make me to relate more with the Isoko nation; in the next four years, a lot more will be done for the Isoko nation because, the Isoko people truly deserve it,” he said, adding, “with the pronouncement of the traditional rulers, this is a total support, which will give me more votes than what you gave us in 2015.”

The governor in an emotion-laden voice, pleaded with the traditional rulers and the president-generals to vote for all the candidates of the PDP, especially, for Alhaji Atiku Abubakar for President, Senator James Manager and Hon. Leo Ogor, saying, “since you have shown love to me, show love to other candidates of the PDP because, the success of the PDP in the February 16 elections will make the March 2 elections easier.”

President of IDU, Chief Iduh Amadhe, said, “what is happening in Isoko has never been done for any man, Isoko people are not sycophants but, when we heard that you (Governor Okowa) are coming to Isoko nation for campaign rally, an emergency national conference was called for you; 19 traditional rulers are here, the president-generals of different kingdoms are here and whatever we have done today will be translated to all the villages in Isoko and It will be respected, you will get the votes of Isoko people.”

The governor was accompanied to the meeting by his wife, Dame Edith and notable politicians in the state.