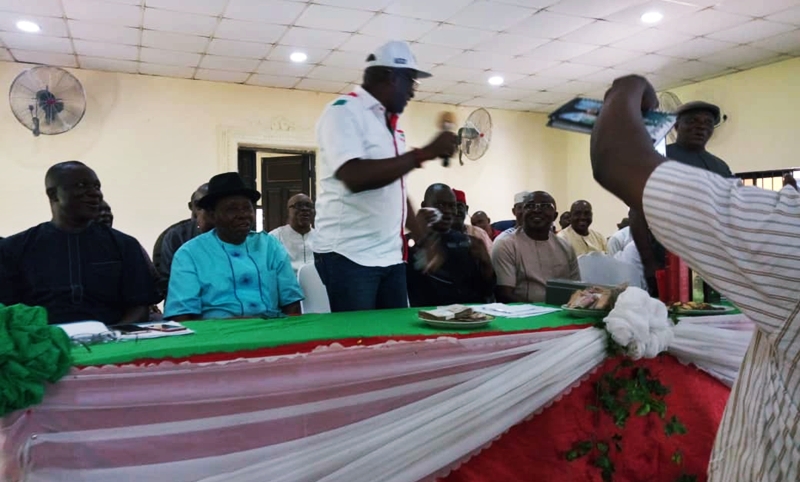 Better fitting the description of a political hurricane, a group of Isoko political bigwigs, Isoko Nation For Okowa (INFO), has declared intent to sweep through the ranks of opposition to clinch victory for Governor Ifeanyi Okowa ahead of the 2019 general elections.

Also inaugurated were 10-men committees for the 24 wards each in Isoko South and North Local Government areas with a mandate to set up 10 men committee across all units in Isoko Nation.

The State Governor, Senator Ifeanyi Okowa, represented by his Director of Protocol, Hon. Ifeanyi Eboigbe said the campaign approach employed by the group is novel and commendable.

He encouraged members of the group to double their effort in ensuring victory for the party ahead of the General elections.

Former Secretary to Delta State Government, Comrade Ovuozourie Macaulay, while addressing members of the group, said the intent of the group is to introduce a new dimension to electioneering campaign geared at returning Senator Ifeanyi Okowa back to the Government house in 2019.

He said, “The decision to host this meeting was urgent. About a year ago, Isoko was in political disarray. Many people were aggrieved. Somethings happened. The governor in his wisdom, called certain leaders and set up a committee in coalition with the two Local Government chairmen. Our assignment and motive is not to only ensure victory for Okowa but to win very convincingly.”

Macaulay said the group will also monitor the collation and declaration of results in all units across Isoko Nation.

Immediate Past Commissioner for Public Complaints, Sir Mathais Eto described the movement as first of its kind since politics in Isoko Nation. “What is happening today has not happened in PDP in Isoko through out its political years; that different pressure groups in Isoko are coming together to work. PDP lost because delegations were not taken to heart. Today the narrative has changed. We are taking this election very personal.”

Eto stressed the need for vehemence in all actions by members of the group stressing the need for real participation at both ward and local government level of the party.