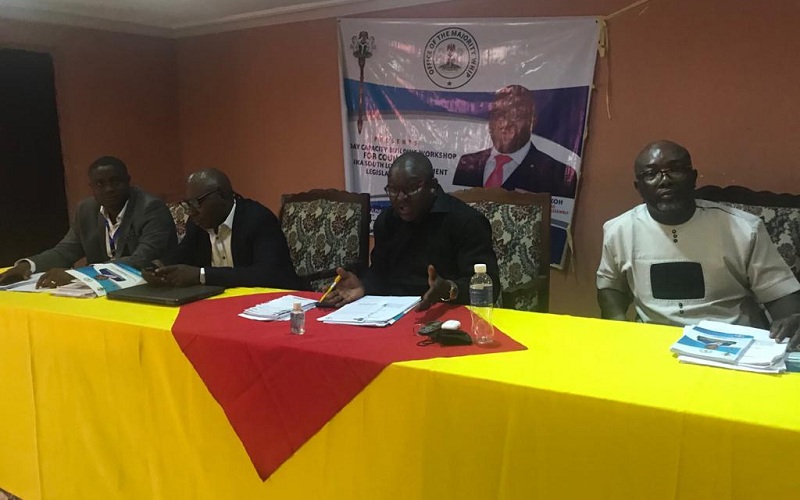 Members of the legislative arms of local government councils in Delta state have been charged to come up with bylaws that would enhance grassroots development and wellbeing of the people.

The charge was made by the various resources persons at a two day workshop organized by the Majority Whip and Member Representing Ika South Constituency in the Delta State House of Assembly, Hon Festus Okoh, for the elected councillors of Ika South local government legislative House, at Abraka, Ethiope East local government area.

The workshop, according to the sponsor, Hon Festus Okoh, was to expose members of the newly inaugurated legislative arm of Ika South local government council, to the tools, rudiments, procedures and practice of the legislature.

He explained that the idea was to broaden their knowledge and capacity as they face the challenges before them as lawmakers, stressing that the local government legislature remains the primary organ needed to bring the required dividends of democracy to the people.

Hon Okoh emphasized that only informed legislature can achieve such desired objectives without undue pressure and commended the team he described as seasoned technocrats and high profile resource persons for the far reaching lectures at the workshop.

Ika South Councillors during the Training

Leading the pack of the various lectures at the workshop was the Clerk of the Delta State House of Assembly, Mrs Lyna Ocholor, who highlighted the important role of the legislature at the local government level in the provision of good governance.

Represented by the Director of Administration, Delta State House of Assembly Service Commission, Mrs Maryjane Ogboka, the Clerk stressed the need for constant training and retraining as it would enhance legislative practices and principles at the local government councils.

The Director Legislative, Delta State House of Assembly, Mr Silvester Olorogun who took participants on Procedures for Passage of Bills as well as Overview of Legislative Practice and Procedures, charged the councilors to have firm knowledge of the rules and orders governing the conduct of business in the councils’ legislative House.

A Deputy Director, also in the legislative department of the Delta State House of Assembly, Dr Stephen Okolo, while speaking on “Committee System in the Legislature“, took participants through the various constitutional provisions with respect to committees and urged them to live up to expectations in their oversight functions.

On the topic “Introduction to Legislative Drafting Principles and Procedures, Mr Ebiton Ogboka, a Deputy Director, Legal Service in the State Legislature, challenged the councilors to at all times produce quality bye laws that would enhance peace, security and good governance at the grassroots.

For his part, an Assistant Director and Clerk, Public Accounts Committee, Delta State House of Assembly, Mr Alex Joe, ACA, while giving an “Overview of Budget Management”, emphasized the need for effective planning and fiscal discipline in the third tier of government.

The Leader of the legislative arm of Ika South Local Government Council, Hon Solomon Igudia and some other Councilors who spoke, expressed appreciation to the Member Representing Ika South in the Delta State House of Assembly, Hon Festus Okoh for putting resources together for the workshop which they said has exposed them to the act of legislative best practice and procedure.

The Speaker of the Delta State House of Assembly, Rt Hon Sheriff Oborevwori, while declaring the workshop open, also commended Hon Okoh for putting the Capacity Building Workshop together for the Councillors, even as he charged the participants to sufficiently equip themselves to exercise their constitutional duties efficiently.

The local government legislators were presented with certificates at the end of the program.