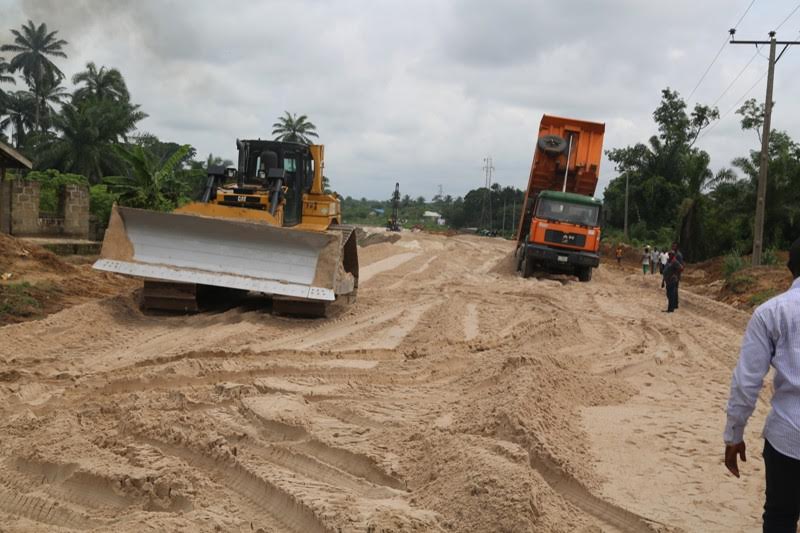 The Governor gave the assurance on Tuesday, June 13, 2017 during the commissioning of Okpe-Olomu/Umolo road, in Ughelli South local government area of the state.

Some of the projects commissioned or inspected by the Governor and his team include, Ewu-Orere road, Ovwor/Effurun-Otor bridge, Rehabilitation of Ekakpamre/Ekrokpe/Usiefurun road, construction of Ugbomro road and the Federal University of Petroleum Resources junction, Osubi Airport road dualization project, and commissioning of Obodo Avenue, Shaguolo area, off Refinery and Petrochemical Company, Ekpan.

“I am impressed with the quality of work done on the roads; we will give more jobs to contractors who deliver their works to specifications and as at when due,” the Governor said.

At the Palace of Okobaro of Ughievwen, HRM Matthew Ediri Egbi, Owahwa II and that of the Ovie of Uvwie, HRM Emmanuel Sideso Abe I, Governor Okowa explained what his administration has been doing to uplift the standard of living of Deltans within the past two years.

He commended the traditional rulers in the state for instilling in their subjects, especially, the youths the need to avoid any action that could lead to break down of law and order, noting that a peaceful state would lead to more revenue for the execution of projects.

The Governor also, assured the people of Uvwie that government would resume work on the Warri/Effurun  road dualization project in the next dry season, adding that other roads in the area would also be looked into with a view to working on them.

He used the occasion to urge miners to liaise with the State government to carry out a proper environmental impact assessment before mining licences are issued to Miners, assuring that the different empowerment programmes will continue to create job opportunities for the people and make them to be employers of labour.