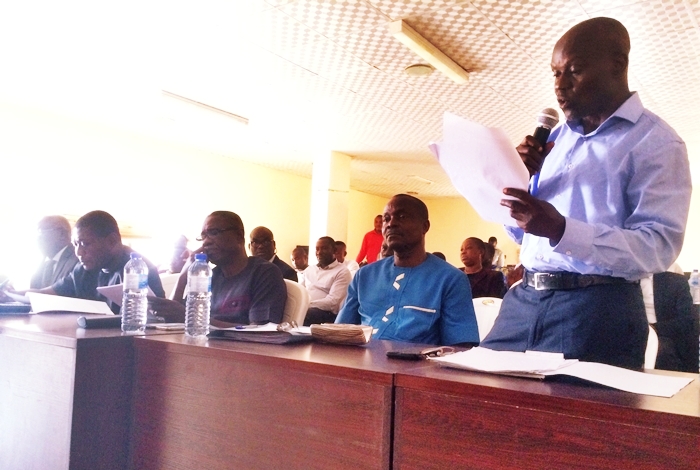 …As DEUX Faults Absence of Drainage Discharge For the Collapse of DLA Road.

Following the efforts of the Delta State House of Assembly Committee on Works to sanitize the various construction firms handling huge projects and capital intensive constructions across the State, series of revelations have been made public as arrangements made by the immediate past Government of Dr Emmanuel Uduaghan have been largely faulted for the failures of key infrastructural projects in the State.

Briefing the Works Committee on Wednesday, January 31, 2018 at the on going investigation proceedings, Consultant to the Delta State Government on the Asaba Airport Project, Engr. Akere Kola blamed the State Government for awarding the Airport Project to a company like ULO, lamenting that ULO Consultant Limited ought not to have been given the project in the first place, as “the contractor was incompetent for the job”.

The Consultant who is a staff of JBI TECH Consults Limited, submitted that the contract was not executed according to the standard of design and that the workmanship was very poor.

Kola revealed that ULO took for granted the Airport Project as it was advised to stick to the design offered by the National Civil Aviation Authority (NCAA) but went ahead to do its own design, at a personal cost for a slight difference, noting that the contractor stopped work in June 2017 and only achieved 24.9% after 29 months.

In another development, while reacting to the claims of the Works Committee, that it has failed to properly execute the DLA Road Asaba; Ezenei Avenue Asaba; Federal College Road Asaba; and the Dualization of Effurun/Osubi Road projects awarded to it, Dr. Walter Olatunde, the Project Director of DEUX Company, said that his company has not abandoned or poorly executed any project in the State.

Dr. Olatunde who is also a Co-Onwer of the Construction Company, faulted the absence of a discharge drainage point at Jesus Saves Road for the collapse of the DLA Road which was completely outside of their contract scope.

“DEUX left DLA road in 2014, having done 98% of drainage, 54% binding course, 38% wearing course, but deteriorated due to 3 years of raining season that left the two layers of asphalt, stone base and drainage walkways which was supposed to last for a minimum of ten years, fully submerged under water coupled with constant vehicular movements.”

He noted that DLA was the worst road in Asaba, coupled with the tough rainfall terrain evident in the State. “A major constraint of linking the drainage to a discharge point at Jesus Saves Road which was completely outside of their contract scope”, Olatunde explained.

Members of Delta State House of Assembly Committee on Works

The Project Director informed that, in the case of Effurun/Osubi Road, having done the bridge, DEUX only moved their equipment to Asaba as elections were at its peak coupled with other constraints such as subsidy removal and difficulty in getting an upward review.

He noted that while the contract was awarded to it on the 29th of December 2010, the Company mobilized to site in 2011 but was unable to go back to site after 2014 due to pending and unaddressed issues which included; change of rates, inadequate quantities and others which would have led to huge loss of money if they went back to site, taking cognizance of other contractors who only went back to site after been given review rates which they were denied.