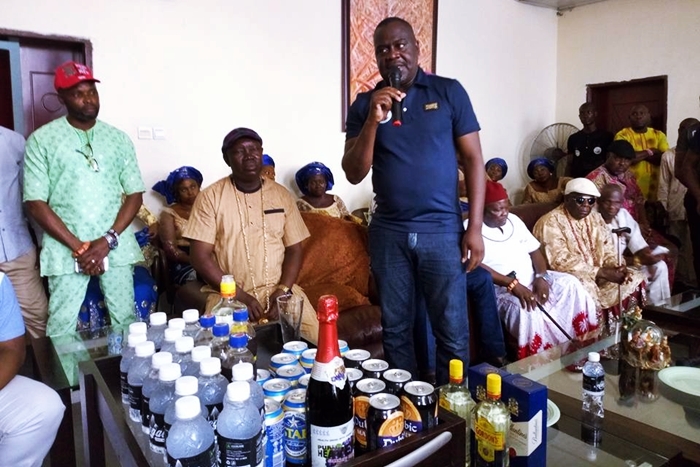 The Member Representing Warri South-West in the Delta State House of Assembly, Hon Daniel Mayuku has said that his intention to vie for a seat in the National Assembly was born out of the need to raise standard of lives and infrastructures in the Warri Federal Constituency as he represents hope for his people.

Hon Mayuku, a lawyer, who stated this at the commencement of his open consultative visits to some community and opinion leaders in Warri Federal Constituency over his aspiration, stated that the challenges of development has once again beckon on him to serve his people in higher capacity, promising never to waiver in his commitment to making life worthwhile for the people of Warri Federal Constituency.

Mayuku noted, “I have always been there for my people that cut across the Itsekiri, Ijaw and Urhobo ethnic nationalities of Warri Federal Constituency, giving them hope and ensuring a meaningful life for all. Testimonies of my goodwill are all over the Federal Constituency and even beyond. I am not a neophyte in the politics of Warri. The people know me and I know them, including their needs. All that is required is their collective support to bring to pass my aspiration and leave the rest for me”.

“A compendium of comments by political leaders in Warri Federal Constituency about my intention to represent the people in the House of Representatives were amazing and would remain a source of strength and resilience to me and my teaming supporters. They have spoken on behalf of themselves and the people, asking me to go and replicate the quality representation I provided to Warri South West Constituency in the state legislature. I can never fail my people. That confidence reposed on me can only be made better.” Mayuku assured.

The Olaraja of Koko in Warri North, Chief Victor Nana of great Nana dynasty, described Mayuku “as a son every father should be proud to have”, praying that his intention will come to pass.

A political juggernaut in Warri North council area, Pa H. U. Elete, who affirmed his total support for Mayuku, stressed “Bossman, I have been hearing of your good works in the Delta State House of Assembly. I have seen also the projects that you influenced to Koko and other areas in Warri North. God bless you. You have my support”.

For his part, the President General of Egbema Political Front and a voice in Ijaw nation and Delta state politics, High Chief J. C. Taylor, said Mayuku is tested and trusted, saying “I have known you for a long time, you have done very well for my people. You have been tested and you have earn our trust. For this the Egbema people will support you”.

The Chairman, People’s Democratic Party, PDP Warri North, Dr. Isaac Wilkie who was very careful of his choice of words said “if it were only me as a person not as a PDP chairman, I would have gladly given you my vote because you are a good and hard working man. I am not campaigning for you but I vividly remembered when the Governor of Delta state, H.E. Dr Ifeanyi Okowa visited us for the town hall meeting, he kept on saying that you (Mayuku) had been on his neck on several projects located here especially the Koko Township stadium, and I know with your efforts these projects will see the light of the day. You are a very good product, and good products sell fast”.

Chief Solomon Areyenka, The Eson of Warri Kingdom, while receiving Mayuku and his team, said “in the political space of Warri Federal Constituency, there are some persons when they indicate interest to contest the position you occupy, you automatically have sleepless nights; Mayuku is such a person. He is trustworthy, dependable and a team player”.

Speaking in the same vein, the Akrakoto of Agbarah and Chairman, Delta State Library Board, Chief Israel Abido, while playing host to the Lawmaker, noted “Mayuku is a person I have admired from a distance, he is highly respectful. I know by the grace of God, when you win the House of Representatives position, you will make a difference. I have heard of you, and let me say this; I have not seen any Itsekiri, Ijaw or Urhobo man that talks evil about you. Please keep up the good name. For this I am giving you my approval. You are indeed not a bad product.”

SDP to Take Over Delta State in 2019 – Idawene
2019: Youths of Ogidigben Drum Support for Igban