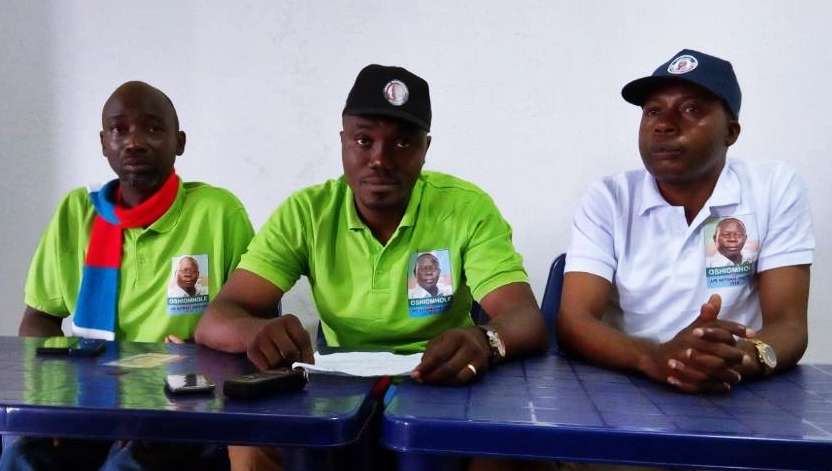 An All Progressive Congress (APC) support group, the Change Advocate of Nigeria (CAN) has declared their strong support for Comrade Adams Oshiomhole to clinch the Party’s top job in the forth coming APC National Convention.

CAN who revealed their stance on the ambition of the former Edo State Governor at the weekend in Asaba, the Delta State capital, also threw their weight behind the Second Term ambition of President Muhammadu Buhari who they said has rescued the country’s economy from the fangs of corruption within a short time in office.

In a Press Conference by the group, its National Coordinator, Mr. Osareniye Ikponwmonba, Director of Strategy and planing, Mr Gabriel Nwajei, and the National Youth Leader, Mr Valentine Ogedegbe unanimously endorsed the aspiration of Comrade Oshiomhole for the office of the APC National Chairman stating that, his wealth of experience in various leadership capacities for the past two decades, is very much needed to strengthen the gains of the party.

The group’s resolution as presented by Mr Gabriel Nwajei, read, “the entire National Executive; Nigeria, Diaspora and State executives of Change Advocate of Nigeria, CAN formerly endorse Comrade Adams Aliyu Oshiomhole (CON) for the National Chairmanship position for All Progressive Congress, APC 2018 convention. We are encouraging party delegates across the country to support his candidature for the strengthening and unity of the party ahead of next year’s election.

“With the recent development in our Nation, President Muhammadu Buhari (GCFR) deserves reelection come 2019 because of the following; Anti-Corruption Fight for recovering stolen money both within and outside Nigeria, Taking the nation out of economic recession, Increase in Agricultural produce, e.g, Rice, Cassava etc, N-Power programme for our young graduates, Presidential assent giving to the Not Too Young To Run bill, Granting Autonomy for Houses of Assembly and to State Judiciaries.

“The Presidential Order for the Post-Humeous Award and Investiture on Late MKO Abiola, now GCFR, Ambassador Babagana Kinkigbe, GCON, Chief Gani Fawehinmi, GCON and others who fought for the struggle of Democracy and making June 12 our Democracy Day. It takes courage to make such decisions as it positively affects our National Lives and coexistence as a nation.

“We acknowledge that there is still more to do in the area of security, Restructuring, Infrastructure, Local Government Autonomy and conducting free and fair elections for the sustenance of our hard earned democracy after all, Rome was not built in day. Our mission as a group is to mobilize youths in the urban and rural areas of the country for the 2019 Presidential Project.” Nwajei read.

While reiterating the resolutions of CAN, the National Coordinator, Mr. Osareniye Ikponmwonba said that the group is going to mobilize for the Presidency come 2019 because of what the President Buhari has done in the past three years. “He has done great things for Nigerians, we believe that he is the only person that can take Nigeria to the next level. We know that over the three years there was alot of economic hardship but we know now the direction of the economy. We believe that when we reelect President Muhammadu Buhari again that this economic hardship that we are facing now is going to be a thing of the past.”

In his response, CAN National Youth Leader, Mr Valentine Ogedegbe said that Change Advocate of Nigeria is endorsing Comrade Oshiomhole for the highest position of our party because the group believes in his antecedence.

The National Youth Leader said, “We are encouraging every delegate across the country to throw their weight behind Oshiomhole for new direction in the party and unity in the party. This is a man that has great experience in the Labour Force of our country. From Labour he came into politics, became the executive governor of Edo State and performed immensely, transformed Edo State from a civil servant state to a business hub within eight years of his administration. This is a man that has left landmark achievements. So we believe him being the national chairman of our party, will strengthen the party and bring cohesion and unity amongst party members across the country for a better Nigeria.

While calling for the reelection of President Buhari, Ikponmwonba commended the President for the notable events within the past few weeks, stating that it is a big step in deepening the democratic process in Nigeria. “So we are encouraging Nigerians to please have patients and reelect President Muhammadu Buhari for the 2019 general election, so that he can conclude this very great works and lay a proper foundation of change that we have brought to this country.” He appealed.

APC Convention: Delta State Exco Committed To Elect And Work With Oshiomhole – Ogodo
Delta South 2019: I Have Not Dropped My Ambition – Uduaghan
Advertisement