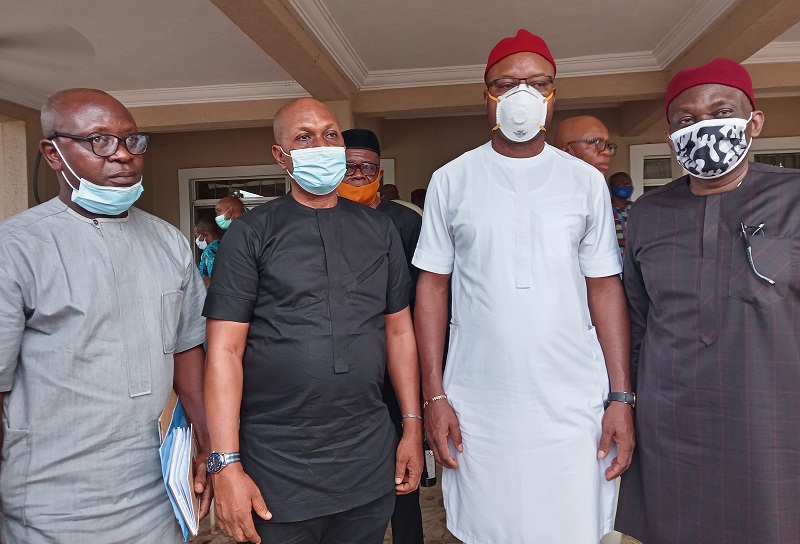 The Aniocha North Local Government leaders rose on Friday, February 12, 2021 from a stakeholders meeting expressing a total sense of commitment and unity to work together for the landslide victory of the party in the March 6, 2021 council elections.

The leaders who converged at the country home of a former deputy governor of the state, Chief Benjamin Elue in Obior, stated that all structures in the party at the council level have resolved to work for the victory of the party.

Speaking to journalists at the end of the meeting, the Minority Leader, House of Representatives and member representing Aniocha/ Oshimili Federal Constituency, Hon Ndudi Elumelu said that the meeting was a huge success as all leaders of the party in the local government area spoke in one voice, stressing that it was the first time in recent past where all PDP stakeholders in Aniocha North are united for a common front.

Elumelu further said that the meeting was also an avenue for Aniocha North PDP to collectively convey its condolence to the State Governor, Senator Ifeanyi Okowa on the demise of his father, Pa Arthur Okorie Okowa.

“Two of the leaders who spoke earlier have spoken my mind. That I had to leave all that I am doing in Abuja to come here shows the importance of this meeting.

‘What we are seeing here is something that has never happened before in this local government area where party leaders come together in unity. Even those who could not come had cause to call to say that they were with us. It is the first of its kind that we are agreeing to meet,” Elumelu stated.

The Minority Leader said also that the Aniocha North PDP leaders felt that they could not go to commiserate with Governor Ifeanyi Okowa on the demise of his father, saying: “We are through you people telling him that we feel his pain and we stand by him. We are happy with what the governor has done and is doing for the people of Aniocha North.

“Today I am the Minority leader of the House of Representatives, if he did not give his support, I would not be. We have commissioners, etc from Aniocha North, Governor okowa has done so well for Aniocha North. We have implicit confidence in his leadership. Call us, send us and we will be there for you,” Hon Elumelu said.

Also speaking, the member representing Aniocha North State Constituency in the Delta State House of Assembly, Hon. Engr. Emeka Nwaobi, said that the newly cultivated and established unity among the people and leadership of the party in the local government area is a major plus for the PDP and a tonic for the party to win the council polls. Nwaobi said: “We are in a new Aniocha North; the leadership of the local government area met recently and agree to henceforth begin to work as one indivisible party.

Speaking earlier on the essence of the meeting, Comrade Ifeanyi Egwuyenga, who is also Delta State commissioner for youth development said: “This is a meeting of leaders  of the PDP Aniocha North Local Government area of Delta State. It is first to express our sincere condolences to His Excellency the governor on the death of his father, our father, Pa Okorie Okowa.

“It is also to reemphasize our belief, commitment and support for his leadership style in running the affairs of governance in the state.  It is also to invigorate and charge the structure that will drive the process of the forthcoming local government elections in Aniocha North. That all the structures, all the mechanisms that we need to put in place to make PDP win the local government election.”

The Aniocha North PDP Chairman, Dr. Charles Ochei said in answer to a question that the party leaders have already worked out the campaign strategy to win the election.

On how he saw his emergence as PDP chairmanship candidate, Okwechime said: “It’s the Lord’s doing, it is not man made.”